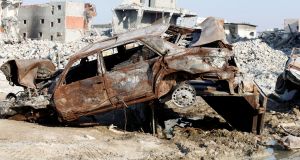 Remains of a car and buildings are seen following a security campaign against Shi’ite Muslim gunmen in the town of Awamiya, in the eastern part of Saudi Arabia. Photograph: Faisal Al Nasser/Reuters

Saudi Arabia has announced the end of military operations against gunmen in the restive Shia town of Awamiya in the oil-rich eastern Qatif province.

Journalists taken by officials to the 400-year old town reported devastation on the scale of war-torn Yemeni and Syrian cities. Vehicles had been flattened, apartment blocks gutted and holed by shells and shrapnel, and water and sewage pipes smashed.

Bulldozers deployed to complete the carnage were driven by helmeted troops. Satellite images reveal that scores of traditional buildings in the al-Musawara quarter have been levelled to make way for shopping centres, office blocks, parks and fountains.

UN experts have warned that such development would erase 400-year-old Awamiya’s cultural heritage.

The 90-day operation launched in May was stepped up this month when elite units joined the besieging forces with the aim of crushing armed elements. Opposition sources say five fighters and 23 civilians were killed and 20,000 of the town’s 30,000 residents have either fled or been evacuated.

Canada is investigating reports that Canadian armoured vehicles supplied to the Saudi military were used in the offensive. Prime minister Justin Trudeau said: “We are looking at these claims very seriously.” Canada sells nearly 20 per cent of its military exports to Saudi Arabia.

The trigger for the latest protests was the government’s announcement of its intention to demolish al-Musawara since, according to the authorities, its narrow alleyways and crumbling buildings provided a refuge to drug pedlars and terrorists.

Awamiya was, however, the flashpoint hometown of Shia cleric and longstanding critic of the government Nimr al-Nimr, who was arrested in 2012, condemned to death in 2014, and executed in January 2016. His execution was condemned by western governments and Shias round the world and exacerbated the deep rift between Sunni Saudi Arabia and Shia Iran.

In March this year, Saudi security forces killed two of Nimr’s cousins during a raid on a farm near Awamiya.

Demonstrations in Awamiya demanding an end to discrimination against Shias began during the regional upheavals of the 2011 Arab Spring. Saudi Arabia bans Shia community centres, bars Shias from serving in most security, national guard, and military units, and excludes Shias from official posts outside Shia-majority Qatif.

Although both Sunnism and Shiism are regarded as orthodox sects, Saudi Arabia’s puritan Sunni Wahhabis consider Shias to be heritics and apostates, an attitude inculcated in members of the armed forces and security services. Videos posted on social media show Saudi soldiers involved in the Awamiya assault insulting the Shia townspeople, calling them “rejectionists” (of Sunnism) and “sons of dogs”.

One of the first military operations conducted by Wahhabi warriors outside their traditional territory in Saudi Arabia’s Nejd province was the 1802 sacking of the Iraqi Shia holy city of Karbala, where Shiism was born in 680 AD when a Sunni army killed the Prophet Muhammad’s grandson, Hussein, during the succession dispute that has divided Islam for 1,000 years.

1 Transgender Cork farmer (65) surprised at positive response to telling her story
2 Bobby Storey: The IRA's planner and enforcer who stayed in the shadows
3 Weather warning issued for parts of the country for this weekend
4 Q&A: How close are we to having a Covid-19 vaccine?
5 Is Donald Trump losing his touch?
Real news has value SUBSCRIBE