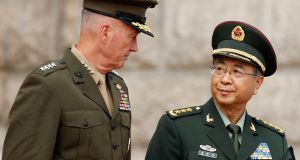 South Korea’s main opposition party and a former head of the US Navy in the region have separately called for the deployment of tactical nuclear missiles in the region to counter the threat from North Korea.

The idea of South Korea playing host to nuclear weapons was quickly shot down by the prime minister, Lee Nak-yeon.

MPs of the centre-right conservative Liberty Korea Party, which holds 107 seats in the 300-seat South Korean parliament, said that a 1991 decision to withdraw US-installed nuclear weapons from South Korea, after a declaration was signed with the North to make the peninsula a nuclear-free zone, should be reversed.

Since the agreement, North Korea has gone on to develop a nuclear capability but it remains unclear whether it has the capacity to deliver a bomb, though a recent assessment by the US Central Intelligence Agency said that it had.

Mr Lee said he was against any such redeployment because it would trigger a nuclear arms race between the North and South, but he added: “Nuclear submarines are another issue. It’s time for us to think about introducing nuclear submarines.”

The idea of expanding America’s nuclear capabilities in the region was supported, in separate comments, by retired vice-admiral John Bird, who said the US should seek to base nuclear weapons in Japan.

Mr Bird, former commander of the US 7th Fleet, which has its home port in Japan and also units in South Korea, said in a CNN panel discussion that basing nuclear bombs in Japan would prompt China to exert greater pressure on North Korea to cease its nuclear programme.

“Many thoughtful people have said we should introduce tactical nukes into the western Pacific, making signals that Japan no longer considers the US nuclear umbrella adequate and is going their own way,” said Mr Bird, who added that pre-emptive strikes on North Korea might be warranted under some conditions.

“Those sorts of things will pique China’s interest. Being that they’re upset about a Thaad, they’d be very upset and not like that option,” added Mr Bird, referring to the controversial Terminal High Altitude Area Defence missile system the US has already deployed in South Korea.

“And if they thought it was realistic, they – the People’s Republic of China – might be willing to really weigh in with the North Koreans. That is only kind of diplomacy that’s going to make a difference.”

However, Japan’s constitution has pacifism enshrined in it and removing that to allow for any nuclear deployment would likely meet with deeply entrenched political and popular opposition, given also the legacy of Hiroshima and Nagasaki.

But while some were talking up weapons deployment, China itself was urging calm. Following a phone conversation between China’s foreign minister, Wang Yi, and his Russian counterpart, Sergei Lavrov, China said both men had “stressed that there is no alternative to a political and diplomatic settlement”.

The Russian foreign ministry’s website concurred, saying the two had discussed “possible ways out of the confrontational spiral on the Korean Peninsula”, and that “military adventures and threats of force” against North Korea were “unacceptable”.

In Beijing, the chief of the joint staff of the People’s Liberation Army, Fang Fenghui, met his US counterpart Joseph Dunford and both affirmed that, despite any differences, they would try to work them through by dialogue in an effort to control risks, of which the still unresolved but less heated crisis over North Korea is the most pressing.

General Fang, a member of the powerful Central Military Commission, said both sides should “push forward stable military ties as an important and major stablising factor in bilateral relations”.

China and the US have separate issues relating to China’s seeming determination to expand its control over the South China Sea to the alarm of Vietnam, the Philippines and Taiwan.