British prime Minister Boris Johnson has announced that pubs, restaurants and hotels can reopen in England in early July, leading one MP to cry "hallelujah!" in the House of Commons. Video: Reuters 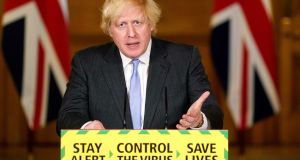 Boris Johnson said Britain’s “long national hibernation” was over and the country could start going back out to enjoy itself again. Photograph: Andrew Parsons/10 Downing Street/AFP via Getty Images

Slapping the despatch box, joking about his urgent need of a haircut and promising to visit pubs and hostelries all over the country, Boris Johnson was back in his cherished and celebrated role as the bearer of good news. After three months under the coronavirus lockdown, Britain’s “long national hibernation” was over and the country could start going back out to enjoy itself again.

Johnson’s phrase was a curious one, with an echo of Gerald Ford’s August 1974 inauguration speech, promising that after the resignation of Richard Nixon “our long national nightmare is over”. And his upbeat message was tempered by a warning that restrictions could snap back into force if failure to respect social distancing triggered a fresh spike in infections.

“Going to the pub is a great British institution and vital if we want to get our economy back on track. Will the prime minister therefore join me in calling on people from the 4th of July to do their patriotic best for Britain and go to the pub?” Dartford MP Gareth Johnson asked.

It was a transparent attempt to grease up to the boss with a softball question but the prime minister was having none of it, adopting his most pious tone as he answered.

Johnson understands the political risks he faces if he bungles the exit from lockdown as badly as he managed Britain’s entry into it. His government has finally launched a testing and tracing system but its performance is patchy and a contact tracing app is months away.

Tuesday’s was the last daily coronavirus press conference and ministers and scientific experts will now only face the media when there are “significant announcements”. Next week, Johnson will make a speech signalling a return to his government’s agenda of “levelling up” the regions, improving infrastructure and investing in public services.

But as he warned of the likelihood of further outbreaks of the virus and the need for constant vigilance, Johnson cannot escape the reality that the coronavirus crisis has undermined public confidence in his government and made his agenda more difficult to realise.