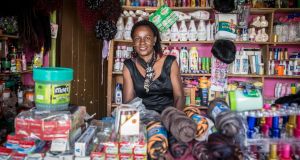 In her packed cosmetics shop in Gulu, northern Uganda, Constance Akamo is fast running out of skin lighteners. The coronavirus lockdown means imports have been stalled or delayed, she says, and it’s hard to get more stock.

Up behind her, in prime position, there are still bottles of “Naomi: ultra lightening lotion”. They are carrot, aloe vera, papaya or lemon flavoured, and come from India.

“Most people want to bleach. Most have very black complexions. If you’re getting a job you should look good, light skin,” Akamo says.

She admits lighteners can damage skin, however, especially when someone buys cheap products or mixes different types of soap and lotion together. “It depends where they get their oils and creams. They can get patches. Some people’s skins are delicate.”

The Black Lives Matter movement has raised awareness globally about all kinds of discrimination based on skin colour, including colourism, which involves prejudice against darker people within a certain racial grouping. It was in that context that last week Johnson & Johnson announced it would stop selling skin-lightening products in the Middle East and Asia.

“Conversations over the past few weeks highlighted that some product names or claims on our Neutrogena and Clean & Clear dark-spot reducer products represent fairness or white as better than your own unique skin tone,” the cosmetics giant said in a statement. “This was never our intention – healthy skin is beautiful skin.”

More than 12,400 people signed an online petition demanding that Unilever stops making a similar product, Fair & Lovely. Some accused the company of hypocrisy after the company’s chief executive Alan Jope tweeted: “Systemic racism and social injustice have to be eradicated. Business has a critical role to play in creating an equitable society which is intolerant of intolerance.”

According to the World Health Organisation, as many as 61 per cent of Indian women and 40 per cent of African women use skin lightening products. There have been numerous attempts to regulate the industry, but demand persists.

Countries that have full or partial bans on skin bleaching products include Rwanda, Ghana, Kenya and South Africa, but they are not always enforced. By the start of this year, about 150 such products had been banned in Uganda.

The negative effects of skin bleaching can include skin irritation, itchy or flaking skin, inflammation and the feeling that your skin is burning, according to doctors. Two common ingredients are hydroquinone and mercury, which medics warn can lead to skin cancer or organ failure.

However, women in many African countries say their prospects – from jobs to dating – are improved when they bleach their skin. It’s not enough to ban the products, you need to create a world where dark-skinned women aren’t discriminated against, they argue.

In Uganda, skin lightening is nothing new. Back in the 1960s, Gulu poet Okot p’Bitek wrote about women who lighten their skin, describing one whose face was “eaten up . . . raw and red . . . tender like the skin of a newly born baby”.

“Some ladies, Africans, others, they don’t trust their colours,” said Ensinikweri Enock, a 36-year-old who works in a salon in Gulu main market, doing manicures and pedicures.

“They like [it], especially ladies. It is dangerous because sometimes when some people are changing the oils you find they get these pimples, especially if you don’t first consult with a skin specialist. And some people, they begin to get some bad smell because the gel is reacting to their skin.”

“For those ones who have been bleaching tremendously it is a problem because money for buying such a kind of gel is not there,” he said. “But still others love their colours.”

That’s the case for Anena Jackline, a 30-year-old actor who lives nearby. “I think one should appreciate who they are,” she said, worrying Ugandans are falling victim to aggressive marketing, putting them at risk of low self-esteem. “It is always good to be proud of yourself. Melanin is so, so good. For me, I can never tamper with my skin. I find it looking good like this. I love it black.”