Even for Americans, this week’s famous suicides felt different 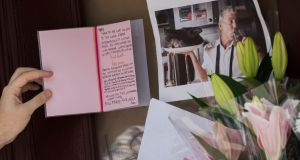 A mourner reads a sympathy card left for Anthony Bourdain at a make shift memorial outside the building that once housed Le Halles restaurant on Park Avenue. Photograph: Mary Altaffer/AP Photo

Over the last few weeks America has lost some of its brightest lights. Ten days ago, designer Kate Spade was found dead in her Manhattan apartment. Three days later chef and writer Anthony Bourdain died in a hotel room in France. Both had taken their own lives.

The deaths of two prominent public figures by suicide has prompted a period of self-reflection, and a national debate about the issue of suicide in the United States. Despite its reputation as an open society, a place where people are quite happy to share their feelings, Americans are surprisingly reticent when it comes to the issue of suicide.

Deaths by suicide are frequently reported in US media in blunt – sometimes brutally factual – ways, with none of the sensitivities that surround the issue in countries like Ireland where suicide is a major social concern.

Perhaps as a result of the chillingly high numbers of homicides and deaths that take place in America every day, the public discourse surrounding suicide is often just as matter-of-fact as the language used to describe murders or accidents – a consequence, perhaps, of the brutal familiarity of death.

But with the deaths of Spade and Bourdain in such quick succession, there was a shift in the public mood. Prominent public figures came out to share their stories of how suicide had impacted on their lives.

Last week the Centre for Diseases and Control, a government health agency, released new figures which showed a dramatic increase in the suicide rate

CNN news anchor Anderson Cooper described how the death of his brother 30 years ago at the age of 23 continues to affect him. “I think about him every day,” he told viewers during an hour-long special on suicide awareness the day that Bourdain died. He interviewed former Barack Obama adviser and well-known political pundit David Axelrod, who opened up about his own father’s death by suicide.

NBC presenter Kate Snow spoke about the impact of her father-in-law’s suicide on her life. People magazine ran a special cover this week, with the images of Spade and Bourdain side by side, beneath a number for the National Suicide Prevention hotline.

The figures relating to suicide in the United States are stark. Last week the Centre for Diseases and Control, a government health agency, released new figures which showed a dramatic increase in the suicide rate. Approximately 45,000 people died by suicide in the United States in 2016. Suicide rates increased in every state over the last two decades – in some states, it increased by 30 per cent.

Some sectors of society were hit more than others – most people who die by suicide are white, for example. Military veterans are particularly vulnerable. The department of veteran affairs estimated last year that 20 veterans die by suicide every day.

The deaths of Spade and Bourdain have prompted calls for more resources for suicide prevention – the federal government gives no funding to adult suicide prevention programmes. Unsurprisingly, the contentious issue of gun control also reared its head.

As Americans came to terms with the shocking deaths of Spade and Bourdain, many were searching for answers – and warning signs

Guns were used in almost half of suicides in America over the last two decades, according to the report, with suicide rates lower in states with stricter gun laws. Ready access to weapons was highlighted as a risk factor when it comes to suicide.

But, overall, the report highlighted the range of factors that contributed to suicide. Significantly, it stressed that more than half of people who died by suicide did not have a known diagnosed mental health condition at the time of death – an important message for a society that has a relatively progressive attitude to mental health treatment.

As Americans came to terms with the shocking deaths of Spade and Bourdain, many were searching for answers – and warning signs.

One of the many observations that emerged in the hours and days following Bourdain’s death was that this was a man who seemed to love life, always chasing after the best the world had to offer as he transported millions of Americans to places they had never seen through his TV programmes.

Through the medium of food he highlighted how we all share a common humanity, that there is more that unites us than divides us whatever our culture and background. As America mourns his death, it is a tremendous legacy.