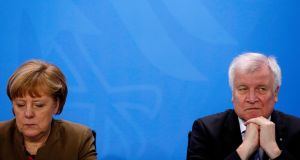 German chancellor Angela Merkel and leader of the conservative Christian Social Union (CSU) Horst Seehofer: Mr Seehofer has the backing of his party to push through his plan on Monday, which would force Dr Merkel to sack him. Photograph: Odd Andersen/AFP/Getty Images

The fronts in Germany’s government crisis hardened on Friday when chancellor Angela Merkel was accused by her Bavarian allies of “splitting” Europe in 2015 with her unilateral refugee policy.

Horst Seehofer, leader of Bavaria’s Christian Social Union (CSU) and interior minister in Berlin, has vowed to tighten up refugee rules on Monday and expel undocumented asylum seekers registered elsewhere in the EU – in defiance of the chancellor’s wishes.

But close allies of Dr Merkel in the Christian Democratic Union (CDU) have warned that unilateral action by its sister CSU party would divide Europe, trigger a “domino effect and, in the end, call into question European integration project” of Helmut Kohl.

Mr Seehofer hit back, saying it was the chancellor’s decision in 2015 to keep open German borders, without informing her EU partners, “which had led to the division of Europe”. Ramping up the rhetoric, he tells Saturday’s Süddeutsche Zeitung daily he was tired of being portrayed by the CDU as a “provincial ruler from Bavaria who doesn’t understand Europe”.

After a week of building tension, a tweet on Friday suggested Mr Seehofer had pulled the plug on the CDU/CSU alliance in the Bundestag. News that the message was fake, from a German satirical magazine, provided only temporary relief.

The drama centres on Mr Seehofer’s 63-point unpublished migration “masterplan” which, according to reports, would order German border police to refuse entry and the right to apply for asylum for anyone already registered in another EU country.

Dr Merkel is pushing for an EU refugee agreement or – at the very least – bilateral agreements with countries likely to be affected by closed German borders.

What began as a regional row has now escalated into a full-scale political crisis with the potential to undermine Dr Merkel’s credibility, rattle her CDU/CSU alliance’s pro-European tradition and bring down a coalition that only came to power three months ago after an excruciating six-month interregnum.

If Mr Seehofer uses his ministerial authority to push through his plan on Monday, Dr Merkel would be forced to fire him, the CSU would withdraw its ministers and parliamentary support and the fourth-term grand coalition would end after just three months.

More likely alternatives: a face-saving compromise either in the short or long term that would give the chancellor time – and leverage – to strike some sort of a refugee quota deal in Brussels.

After a week on the back-foot, Dr Merkel came out fighting on Friday. In a speech she unearthed an old quote from post-war CDU leader Ludwig Erhard that sent a clear message to her two least favourite men in politics: Donald Trump and Mr Seehofer.

“The world is too integrated, too interlinked that any country can decide its own fate,” she told her audience. “Very clever sentence, that one.”

Meanwhile her closest allies fanned out on all channels – television, radio and social media – to argue her case against closing the borders along CSU lines.

“By doing that we risk that the Italians no longer register any arrivals and once again we have a chaotic situation,” said Armin Laschet, CDU state premier of the powerful western state of North Rhine-Westphalia.

After a hectic week, a weekend of shuttle diplomacy looms with Bundestag president Wolfgang Schäuble reportedly in the role of mediator.

As Dr Merkel’s junior coalition partner, the Social Democratic Party, has watched the intrigues as a bystander, prompting deputy chancellor and SPD finance minister Olaf Scholz to warn on Twitter: “The task of governing our country is not an episode of ‘Game of Thrones’ but a serious matter. All those involved should never forget that.”