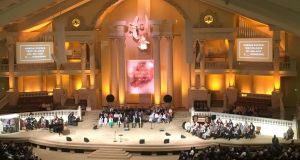 The enormous First Pentecostal Church of Jesus Christ in Little Rock, Arkansas, is one of the biggest evangelical churches in the US

In the seventh part of her series “Coast to Coast: Travels in Trump’s America”, Washington Correspondent Suzanne Lynch travels to Arkansas

It’s 10.30am on Sunday, and as the rain tumbles down in Little Rock, Arkansas, hundreds of cars line up to enter a church on the outskirts of the city.

The enormous First Pentecostal Church of Jesus Christ is one of the biggest evangelical churches in the US, its gleaming 193 steeples looming over its 20-acre site on Calvary Highway.

While the weekly Sunday service, which is livestreamed over the internet, regularly attracts thousands of people from across the greater Little Rock area, this weekend is particularly busy.

Little Rock is hosting the Apostolic International Camp Meeting, the church’s annual gathering which brings people together from all over the world for five days of meetings and prayer.

As the two-hour service begins under the cavernous 75ft high dome, thousands of people participate in the evangelical service. Music features heavily, with a 12-piece band, grand piano and full choir on stage, pumping out religious rock anthems.

Throughout the service people are encouraged by the pastor to express themselves freely whenever they feel the holy spirit entering them, and they respond by taking to their feet and waving their arms in the air.

Though there are some African-American worshippers, the congregation is mostly white. Women are conservatively dressed – mostly in full-length skirts, trousers are banned, while make-up is discouraged.

“We respect the difference between the sexes,” says Anna, one of the female ushers, as she welcomes me to the church.

Originally from Rhode Island, she recently moved to Arkansas after meeting her husband online. As an evangelical Christian she felt her views and perspectives were not respected in the northeast of the country.

“In New England people don’t talk about their religion. There is no place for it. We call this region the Bible Belt because of the number of churches that are located here,” she explains proudly. “It’s part of the culture here, part of who we are.”

Like many people in the congregation, Anna is a supporter of US president Donald Trump. “I think he is doing a great job. He’s living out the Christian ethos.”

I ask her to elaborate. Surely some of the president’s pronouncements are not in keeping with Christian values? “The bible says, ‘you don’t work, you don’t eat’,” she responds. “Trump is a businessman who knows the value of work.”

Like many Republican supporters, she is impressed by the president’s business credentials, believing that too many people in the US rely on the state too much.

Anna’s views are not unusual. According to data from Pew Research Institute, 81 per cent of evangelical Christians cast their vote in favour of Trump in last year’s presidential election.

The thrice-married casino-owner may not seem an obvious fit with the evangelical community, and Trump’s candidacy did pose a moral dilemma for some evangelicals.

Several prominent women in the community and at least two evangelical publications pulled their support for Trump when a video of him emerged before the election boasting of sexually assaulting women.

But most conservative Christians, including prominent pastors, rallied behind him. In fact, more evangelicals voted for Trump than for previous Republican candidates Mitt Romney and George W Bush.

Speaking to people in the First Pentecostal Church, most are highly critical of Hillary Clinton and Barack Obama, perhaps suggesting that the support for Trump was as much part of a reaction against eight years of having a Democrat in White House, rather than affinity with Trump the individual.

Trump’s appointment of conservative judge Neil Gorsuch to the supreme court delighted many in this Republican base, aware, perhaps, that the appointment will give a conservative political hue to the court that will long outlast Trump’s presidency. Most of the congregation here are staunchly anti-abortion.

Trump’s own religious identity is intriguing. Raised as a Presbyterian, he has long consulted Paula White-Cain, the leader of the New Destiny Christian Center, as a spiritual adviser.

Keenly aware of the religious Republican vote, the Trump administration courted the evangelical community during the election campaign. In June last year his team assembled an evangelical “advisory board” to advise the then presidential candidate, including Dr Robert Jeffress of the First Baptist Church of Dallas, who said last week that God had given authority to the president to take out North Korean leader Kim Jong-un.

That contact has continued during the first six months of the presidency. Photographs emerged in recent weeks of a meeting between more than 20 evangelical leaders, Trump and vice-president Mike Pence in the Oval Office, with one picture showing the vice-president bowing his head in prayer with the group.

Legislatively Trump has also been keeping an eye on his Christian conservative base. In May, he signed an executive order on religious liberty that includes removing a ban on non-profit organisations, including churches, from endorsing or opposing political candidates, a move welcomed by church leaders.

As the First Pentecostal service draws to a close this Sunday morning, I move on from the church on Calvary Road, and drive into the centre of Little Rock.

Small, picturesque churches – mostly Baptist – line the streets leading into the state’s capital and the surrounding rural countryside, a place where the phrase “Bible Belt” is not a pejorative term but a label that proudly denotes the region’s religious identity. Arkansas is reliably Republican – 61 per cent of the state went for Trump. But it was not always so.

Its most famous resident is Democrat Bill Clinton, who was governor of the state for 10 years, before Arkansas then backed him for president in 1992 and 1996. Clinton is still a popular figure, both in his home state and throughout the south.

Throughout my journey through the southern states of America, when I ask Republicans if they ever supported a Democratic candidate, Bill Clinton is a name that pops up.

Not so for his wife Hillary.

Despite being the state’s first lady for 18 years, Clinton failed to carry Arkansas in last November’s election, though the area around Little Rock and the eastern part of the state along the Mississippi delta, with its large African-American population, voted Democrat.

Much of the reason goes beyond Hillary Clinton; Arkansas is one of many states that saw a drift to the right over the last 20 years, with southern white voters seeing the Republican Party as their natural home.

Despite the state capital’s strong well-publicised links to the Clintons – the city’s airport is the Bill and Hillary Clinton airport while the William J Clinton Presidential Library and Museum is housed here – ultimately Arkansas has become a red state.

After strolling around the city I stop for lunch before resuming my journey south through rural Arkansas and towards Texas.

There are few lunch options in the quiet downtown area, so I opt for an Asian restaurant that appears busy. Inside it’s packed with Sunday lunch diners – it is also one of the most ethnically diverse places I’ve visited in Arkansas.

Groups of African-American families are eating together, the staff is mostly Japanese, and there are dozens of white families and couples dining on sushi and teriyaki.

At the huge round tables I am soon joined by a group of people. We start talking, and I discover they’ve just left the Pentecostal service I’ve attended.

As I look around the restaurant I spot the trademark Sunday bests – young men with side-partings, and shirts and ties, who are gathering for lunch after one of the many Sunday morning services around the city.

My new dining partners make a diverse bunch. An African-American woman and her 10-year-old son, two white men and a teenage boy, and a young woman in her 20s. They explain to me that they’ve just met as they’ve come to Arkansas for the annual camp meeting. They’re from Georgia, and are being hosted by a family in Little Rock.

As the food arrives, they pause and say grace. As the eating commences talk turns to politics. Like most people I’ve met in Arkansas, they voted for Trump, though one member of the group, Ray, says he would have liked to see Ben Carson, the African-American Republican neurosurgeon, run for president.

They say they’re happy with how the president is performing.

“The media are not giving him a chance,” says Ray, echoing the sentiment I’ve heard from Republican voters from the south.

They also like his business background, and the fact that he is not afraid to say what he thinks.

After a quick lunch, they’re off and the restaurant suddenly clears out. I get back on the road and start the journey south towards the next stop on my itinerary, Texas.

After a couple of hours I pass the village of Hope, Arkansas, the aptly-named birthplace of Bill Clinton. A sign proudly points out his family home, where Clinton was brought up by his mother and grandmother before moving to Hot Springs, to the north, at the age of six.

As the sun begins to set, the landscape darkens. All is rural and quiet, except for the odd truck that powers by on the dead straight freeway.

Small churches with their white spires decorate the countryside as Arkansas beds down for the night and the start of a new week beckons. The border with Texas looms in the distance.