US president warns country it should be ‘very, very nervous’ if it harms the US 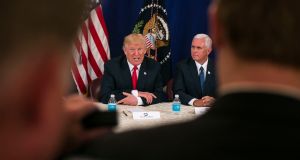 US president Donald Trump renewed his attack on North Korea last night, warning that the country should be “very, very nervous” if it does anything to harm the United States.

Speaking from his golf club in Bedminster, New Jersey, the president said that his bellicose statements earlier this week, in which he warned that North Korea would face “fire and fury”, might not have been tough enough.

“They’ve been doing this to our country for a long time, for many years, and it’s about time that somebody stuck up for the people of this country and for the people of other countries,” he said. “If anything, maybe that statement wasn’t tough enough.”

Mr Trump took specific aim at North Korean leader Kim Jong-un, saying: “He has disrespected our country greatly. He has said things that are horrific. And with me, he’s not getting away with it.

“He got away with it for a long time between him and his family. ... This is a whole new ball game.”

North Korea’s army would complete plans in mid-August to fire four intermediate-range missiles over Japan to land near Guam, when they would be ready for Mr Kim’s order, the state-run KCNA news agency said. The plans called for the missiles to land in the sea 30-40km from the US Pacific territory of Guam. “I read about, ‘We’re in Guam by August 15th.’ Let’s see what he does with Guam. He does something in Guam, it will be an event the likes of which nobody’s seen before, what will happen in North Korea,” Mr Trump said, but did not offer specifics.

While South Korea stressed that a diplomatic avenue remained open, Japan struck a more strident tone. Its defence minister Itsunori Onodera said if North Korea fired a missile at Guam this would trigger his country’s right to exercise collective self-defence.

Although Mr Trump’s combative rhetoric has alarmed many across the world and sparked criticism from Democrats, many conservative news organisations in the US have rowed in behind the president, arguing that his predecessor Barack Obama failed to confront the threat posed by the nuclear state. – (Additional reporting: Reuters)