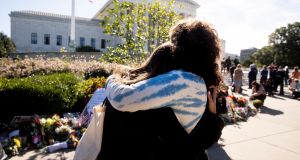 Crowds gathered near the steps of the Supreme Court in Washington DC throughout the weekend, mourning the death of Supreme Court Justice Ruth Bader Ginsburg who passed away on Friday evening.

Ms Ginsburg, who was 87, died at home surrounded by her family due to complications from pancreatic cancer, the Supreme Court announced.

Ms Ginsburg was nominated to the court by president Bill Clinton in 1993 and served for 27 years on the nine-member court. She was only the second woman to be appointed to the highest court in the United States.

Born in 1933 in Brooklyn, New York, she studied at Cornell University and later at Harvard Law School, before building a glittering legal career as a litigator and academic. She argued six landmark cases on gender equality before the US Supreme Court, winning five, and was a champion of women’s rights, particularly in the workplace. More recently, she emerged as something of a hero for young progressives, known by the moniker RBG.

Her death occurs a little more than six weeks before November’s presidential election, and has already prompted a deeply partisan battle in Washington over whether the Republican-controlled Senate will approve a nomination for her replacement before election day.

According to NPR radio, Ms Ginsburg told her granddaughter in the days before her death: “My most fervent wish is that I will not be replaced until a new president is installed.”

But US president Donald Trump said on Saturday that he would announce a candidate as early as this week, and is likely to nominate a woman.

VIRGINIA, and everywhere else for that matter, I am the only thing standing between you and your 2nd Amendment. If I am re-elected, it is 100% SAFE. If not, it is GONE!

Ruth Bader Ginsburg stood for all of us. She was an American hero, a giant of legal doctrine, and a relentless voice in the pursuit of that highest American ideal: Equal Justice Under Law. May her memory be a blessing to all people who cherish our Constitution and its promise.

“It will be a woman, a very talented, very brilliant woman,” he said during a campaign rally in North Carolina. “I think it should be a woman. I actually like women much more than I like men.”

His comments immediately prompted speculation that Amy Coney Barrett, a 48-year-old judge at the US Court of Appeals for the seventh circuit in Chicago, is in the running. Also under consideration is Atlanta-based judge Barbara Lagoa. Originally from Miami, she is of Cuban descent and is a member of the conservative Federalist Society. Both women are Catholic, and would be the youngest justices appointed to the bench if confirmed.

In an indication that Mr Trump is likely to use the Supreme Court vacancy to motivate voters ahead of the election, he tweeted on Sunday:

“VIRGINIA, and everywhere else for that matter, I am the only thing standing between you and your 2nd Amendment. If I am re-elected, it is 100% SAFE. If not, it is GONE!, “ he said, a reference to the constitutional right to bear arms, one of the many issues the Supreme Court may rule on in the coming months and years.

Though Senate Majority leader Mitch McConnell refused to hold a confirmation hearing for President Barack Obama’s nominee to the court in 2016 because it was an election year, the Kentucky Republican confirmed on Friday that he would hold a vote on Mr Trump’s nominee. However, it is unclear if a confirmation hearing and vote would take place before November 3rd or before the sitting of the new Congress in early January.

Responding to the passing of Ms Ginsburg, Democratic presidential candidate Joe Biden said that America was mourning an “American hero, a giant of legal doctrine, and a relentless voice in the pursuit of that highest American ideal: Equal Justice Under Law.”

But he added: “Just so there is no doubt – let me be clear – the voters should pick a president, and that president should select a successor to Justice Ginsburg. This was the position that the Republican Senate took in 2016, when there were nearly nine months before the election. That is the position the United States Senate must take now, when the election is less than two months away. We are talking about the Constitution and the Supreme Court. That institution should not be subject to politics.”

With the death of Ms Ginsburg, the nine-member court has lost one of its most liberal voices. Five Republican-nominated justices now remain on the bench, and three liberal justices. Among the cases that the court is likely to consider in the near future are challenges to the Affordable Care Act, the healthcare policy known as Obamacare, voting rights, and one of the most contentious issues in the United States – the legal right to an abortion enshrined in the 1973 Roe V Wade ruling.

Ms Ginsburg, who had suffered from several bouts of cancer, participated in a range of oral arguments and rulings right up to her death, including from her hospital bed in July.

“Our Nation has lost a jurist of historic stature. We at the Supreme Court have lost a cherished colleague. Today we mourn, but with confidence that future generations will remember Ruth Bader Ginsburg as we knew her - a tireless and resolute champion of justice.”

She will be buried alongside her late husband, who died in 2010, at Arlington National Cemetery.