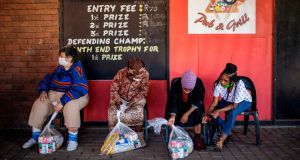 South Africa’s Gauteng province is about to become the country’s coronavirus epicentre after a surge in infections.

Gauteng had recorded 71,488 of these compared to the Western Cape province’s 72,156, while the former now has far more active Covid-19 cases than the latter.

Addressing parliament on Wednesday, health minister Zweli Mkhize warned the Covid-19 “storm” had arrived and that South Africa’s bed capacity in all provinces is expected to be overwhelmed in the weeks ahead.

However, he added the country’s modelling projections were still following an “optimistic” scenario in terms of the country’s likely infection rate. “Fewer people were infected in May and June than was previously predicted,” he said.

South Africa’s department of health also reported a further 192 Covid-19-related deaths in 24 hours, bringing the national total death toll from the virus to 3,502. Of these, 71 were in Gauteng and 44 in the Western Cape.

Indeed, Gauteng has recorded the most virus-related deaths of South Africa’s nine provinces for three consecutive days since Sunday.

Senior researcher at South Africa’s Council for Scientific and Industrial Research Ridhwaan Suliman tweeted on Tuesday that the country’s Covid-19 “doubling rate” – the time taken for the total number of cases to double – is now at 14.4 days.

Mr Mkhize has attributed Gauteng’s recent surge in cases to the easing of lockdown restrictions in June, which reopened the country’s economy and allowed millions of people to return to work.

Eastern Cape has also witnessed a major rise in Covid-19 infections, and by Tuesday had recorded 564 deaths and more than 40,000 cases.

Although the government’s decision to implement a hard lockdown in late March was designed to give provinces time to prepare their healthcare facilities, many Gauteng and the Eastern Cape hospitals have struggled to cope with the Covid-19 onslaught.

To aid the Eastern Cape, the province currently struggling the most, the national government has sent 75 military health professionals to support four urban hospitals buckling under the strain.

In addition, 2,080 extra beds and 218 high-care beds will be made available by converting museums, school hostels, nursing colleges and training centres into temporary medical facilities, provincial officials have said.