Coronavirus: Trump urges churches to open in challenge to governors

‘We need more prayer, not less,’ says US president as places of worship ‘essential’

US president Donald Trump identifies places of worship as "essential services" and demands that states reopen churches, synagogues and mosques this weekend, threatening to "override" governors who refuse. Video: Reuters 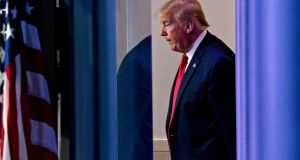 US president Donald Trump on Friday urged churches to open this weekend, setting up a potential battle with governors across the country who have maintained strict social distancing measures to combat the spread of coronavirus.

“The governors need to do the right thing and allow these very important essential places of faith to open right now, this weekend. If they don’t do it, I will override the governors,” Mr Trump said in the White House. “In America we need more prayer, not less.”

Declaring that houses of worship should be deemed “essential places that provide essential services”, he said it was an “injustice” that off-licences and abortion clinics had been allowed to open but not churches, synagogues and mosques.

“These are places that hold our society together and keep our people united,” he said, adding that “many Americans embrace worship as an essential part of life”.

The question of churches reopening has become an important issue for conservative groups in recent weeks, with several churches taking legal action against local and state officials for prohibiting in-person meetings.

The president had previously said he wanted the US to reopen before Easter Sunday in April, predicting “packed churches all over our country”.

Mr Trump’s challenge for churches to reopen – which may be resisted by some governors – came as America heads into the Memorial Day bank holiday weekend, which is traditionally seen as the start of summer.

Beaches in many states are due to reopen, some with limited capacity.

With the number of deaths from coronavirus now at more than 95,000, the US remains the country with the highest death toll from Covid-19. All states across the country have lifted restrictions to some extent.

Speaking at the White House on Friday, coronavirus task force co-ordinator Deborah Birx said the number of cases across the country was decreasing. However, she highlighted high infection rates in the greater Washington DC area.

Asked about Mr Trump’s request for churches to reopen, Dr Birx said faith leaders should be in touch with local officials. “I really firmly believe that a knowledgeable community can really make judgments for themselves,” she said, adding that those people at risk should not attend services.

Ms Birx was also questioned about a new study published in the medical journal The Lancet which showed that the use of hydroxychloroquine increased the risk of death in patients with coronavirus.

Mr Trump has said he has been taking the drug, which has not been approved to treat or prevent Covid-19, for the past two weeks.

The study of 96,000 people with Covid-19 on six continents found they had a significantly higher risk of death if they took the anti-malarial drug than if they did not.

The research also found that those treated with the drug, or the closely related chloroquine, were more likely to develop arrhythmia, a type of irregular heart rhythm that can lead to sudden cardiac death.

“I think the FDA has been very clear . . . about their concerns about hydroxychloroquine particularly when it’s combined with prophylaxis,” Ms Birx said, referring to the US Food and Drug Administration’s guidance, which warns against the use of the drug outside a hospital or clinical trial setting.

Earlier in the day, Mr Trump renewed his attacks on China as he addressed an event in the White House grounds to honour veterans ahead of Memorial Day on Monday.

Highlighting again his decision to ban flights from China in January, he said that Democratic presidential candidate Joe Biden, his own White House adviser Anthony Fauci and others had initially opposed the decision before applauding it, while House speaker Nancy Pelosi had been “dancing in the streets of Chinatown” in San Francisco. “These people are sick,” he said.

During the event, a group of bikers rode around the grounds of the White House with American flags to the tune of the Guns N’ Roses song Sweet Child O’ Mine.

Mr Trump also praised the work of veteran affairs secretary Robert Wilkie, who he said had fired more than 8,000 people in his department who “didn’t take care of our vets”, describing them as “sadists” and “thieves”.

“If they don’t take care of our vets, you fire them,” he said, claiming that trust by veterans in the department was the highest it has ever been under his administration.