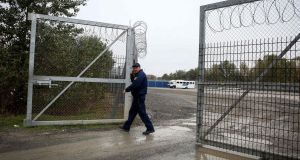 A member of the Hungarian police closes a razor-wired fence at a migrant transit centre near Roszke, at the border crossing with Serbia. File photograph: Oliver Bunic

Hungary has announced that it is reluctantly closing the “transit zones” on its border with Serbia, after the European Union’s highest court ruled that holding asylum seekers in the camps amounted to unlawful detention.

Prime minister Viktor Orban’s nationalist government built fences on Hungary’s southern frontier in 2015 to stop refugees and migrants from crossing the country en route to wealthier EU states. The transit zones were then established as areas in which to keep people while their asylum requests were being processed.

Human rights groups have long called for the closure of the camps, where some people remained for well over a year and food was sometimes denied to asylum seekers whose initial applications were rejected.

“The transit zone was a solution that protected Hungary’s borders, and the European Court of Justice’s ruling in this case was unfortunate. Since Hungary is obliged to comply with the verdict, it can do nothing but eliminate the transit zones,” Gergely Gulyas, Mr Orban’s chief of staff, said on Thursday.

“The Hungarian government disagrees with the ruling; we consider it a risk with regard to European security, but as an EU member state we will adhere to all court rulings.”

Mr Gulyas added that asylum applications for Hungary must now be lodged at its embassies and consulates in neighbouring countries, rather than at the border.

The Hungarian Helsinki Committee (HHC), which has fought numerous legal battles with the government over its asylum policy, said that “overnight, [the] authorities released everyone – about 300 people, many families with small kids – unlawfully detained in the transit zones and transferred them to open or semi-open facilities.”

The European court (CJEU) reviewed the case of two Afghans and two Iranians and found they were effectively being detained in the transit zones because Hungary would not give them asylum and Serbia would not readmit them.

“The two families concerned by the judgment have been detained unlawfully for 464 and 526 days. Their suffering and injustice must now come to an end,” Marta Pardavi, co-chair of the HHC, said of last week’s verdict.

“This is a significant victory for everyone who is locked up in metal containers behind barbed wires in Hungary. It’s also a victory for all Hungarian citizens because the court’s judgment strengthens protection against arbitrary detention.”

Mr Orban has described mostly Muslim refugees and migrants as a threat to Europe’s security and identity, and portrayed himself as a defender of conservative Christian values who is building “illiberal democracy” in Hungary.

Hungarian deputies voted this week to ban people from changing their gender on identity documents, in a move that rights groups say could increase discrimination against transgender people and other members of the country’s LGBTI community.

Rights groups are urging Hungarian president Janos Ader not to sign the Bill into law, while the government insists that the obligation to state “gender at birth” on official documents will not impinge on people’s freedoms.