Irish travellers to be exempt but most arrivals face £1,000 fine for failure to comply 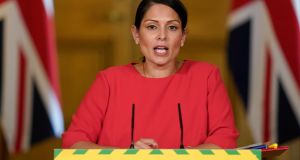 British home secretary Priti Patel: “We are not closing our borders, and I think people should recognise that.” Photograph: Andrew Parsons/10 Downing Street/Crown Copyright/PA Wire

Business groups have accused the British government of pursuing an “isolationist” policy after the home secretary, Priti Patel, confirmed that arrivals in the UK will have to quarantine themselves for a fortnight or face a £1,000 (€1,120) fine.

From June 8th, almost everyone arriving at ports and airports, including UK citizens, will be required to travel directly to an address they provide to the authorities, where they must then self-isolate for a fortnight.

Travellers coming from Ireland, which is in the Common Travel Area, will be exempt from the self-quarantine.

Ms Patel said: “I fully expect the majority of people will do the right thing and abide by these measures. But we will take enforcement action against the minority of people who endanger the safety of others.”

Mr Patel defended the stringent new measures at the Downing Street press conference on Friday. “We are not closing our borders, and I think people should recognise that,” she said.

But business groups have reacted furiously, saying ministers should instead have taken a more targeted approach – and sought international agreements that could have allowed some restrictions to be waived.

Stephen Phipson, chief executive of Make UK, said: “Industry will be disappointed with this measure which is isolationist and will prevent many essential daily cross-border journeys to provide service and maintenance. Additionally air freight on passenger aircraft provides a significant proportion of UK export and supply chain capacity, all of which is vital to operations as companies begin to get up and running.”

Adam Tyndall, programme director of the business lobbying group London First, said: “Deciding to quarantine all passengers arriving into the UK is an indiscriminate response to an increasingly nuanced situation. Two weeks in isolation will put off most travellers, all of whom would have contributed to the UK’s economic recovery.

“The UK is a world leader in aviation and should be forging international agreements between low-risk countries.”

Kate Nicholls, chief executive of UK Hospitality, said: “The imposition of a quarantine period will inevitably damage international visitor travel, and the longer it is in place, the more damage it will wreak.”

The government has not ruled out negotiating “air bridges” – an idea championed by the transport secretary, Grant Shapps. The UK would seek to strike bilateral agreements with countries with low incidence of Covid-19 under which quarantine restrictions could be waived.

But Ms Patel made clear they were not imminent. “I think we should be absolutely open to all ideas. This is not for today, but this doesn’t mean we should rule this out in the future. We will look at all options,” she said.

Authorities will carry out spot checks to ensure the new rules are being complied with – using details supplied by travellers on a dedicated form. Failure to provide one will result in a £100 fine.

The stringent new quarantine system will be reviewed every three weeks. The government confirmed there will be exemptions for freight drivers; doctors and scientists working on the pandemic; and fruit pickers, who will be expected to confine themselves to the farms where they work.

The regime will be in place across the UK, though the devolved administrations are expected to publish details of how they will implement it.

The move rekindled the debate about why ministers did not restrict travel from areas affected by coronavirus much earlier in the outbreak.

Papers published by the Sage group of scientific experts on Friday showed that its modelling group SPI-M-O suggested on February 3rd that restricting travel from badly hit areas, including China, could delay the onset of the disease in the UK by up to a fortnight.

“Based on current information on doubling times from China, the average delay expected to result from a 90 per cent reduction of travel from China may be up to two weeks,” the experts said at the time.

They cautioned that preventing direct arrivals from China alone would have had a smaller impact, because of the risk of infected people coming via third countries.

But she said they were not a long-term solution. “If you’re asking people voluntarily to self-isolate for two weeks when they don’t have any symptoms and there’s pressure to go to work or they lose their jobs – it’s hard for people to know what to do.”

She suggested that once the government’s track and trace system is in place, the restrictions could potentially be loosened “If they have got a world-beating test, track and trace system up and running they can test people when they get off and then at that stage you could see a scenario at which point quarantine measures become redundant,” she said.

Government messaging over the quarantine had been frustrating, Ms Nandy said, with seven occasions in which announcements relating to the policy had been made by a minister or briefed to newspapers and then dropped or rowed back from within the last month.

She said the fact that the government had applied quarantine measures to only a handful of flights earlier in the crisis was “completely incoherent and inconsistent”. – Guardian