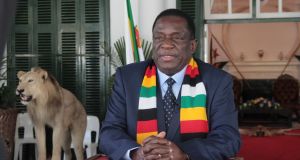 Zimbabwean president Emmerson Mnangagwa said the restrictions would remain in place indefinitely because the country needed to ease strategically out of its lockdown. Photograph: EPA/Aaron Ufumeli

International rights groups have expressed concern that the Zimbabwean government’s decision to extend a nationwide coronavirus lockdown indefinitely could be used to suppress human rights.

Last Saturday, President Emmerson Mnangagwa said the restrictions, which were introduced on March 30th in response to the global pandemic, would remain in place “for an indefinite period” because the country needed to ease strategically and gradually out of its lockdown.

The measures, which include a ban on public gatherings and movement restrictions, have worked so far, according to Mr Mnangagwa, who said the country’s low number of Covid-19 cases and deaths was proof of their effectiveness.

As of May 20th, Zimbabwe had recorded 48 cases of Covid-19 from the 32,862 tests it had conducted. There have been four confirmed Covid-19 related deaths.

Although governments globally have introduced similar lockdowns to Zimbabwe’s to tackle Covid-19, Movement for Democratic Change (MDC) Alliance leader Nelson Chamisa has said that Mr Mnangagwa has “opened an avenue to arbitrary rule”.

In a Twitter post, the main opposition party leader wrote: “Whereas measures to contain the Covid-19 pandemic are a necessity, we disagree with entrenching arbitrary rule under the guise of fighting the pandemic ... The indefinite extension changes the situation in a fundamental way.”

Mr Mnangagwa’s lockdown extension, which will be reviewed every two weeks, came a day after three female MDC members alleged they were arrested, and then abducted from police custody and sexually assaulted.

MDC party youth campaigner Cecilia Chimbiri, MP Joana Mamombe and activist Netsai Marowa claim they were tortured by alleged state agents after holding an anti-government protest in the capital, Harare, on May 14th over its handling of the Covid-19 crisis.

Among other things, the women say they were held and tortured for 24 hours in an outdoor pit and forced to drink each other’s urine. Zimbabwe’s justice minister Ziyambi Ziyambi has reportedly accused the women of staging their assault and said they should be arrested and prosecuted.

Human Rights Watch’s southern Africa director, Dewa Mavhinga, told The Irish Times he was “extremely worried” that Mr Mnangagwa’s Zanu-PF government might be using the pandemic as a smokescreen to commit acts of oppression.

“Our response [to the indefinite lockdown] is that government should only implement measures that slow the spread of the virus. Where a lockdown is deemed essential, the state must also respect the rights of citizens,” he said.

Amnesty International’s deputy director for southern Africa, Muleya Mwananyanda, also cautioned that governments should not use Covid-19-related lockdowns to deny people their rights.

However, a source at an international NGO in Zimbabwe who spoke on condition of anonymity said they believed the indefinite lockdown was more to do with the government’s lack of resources than a high-level desire to oppress opposition to its rule.

Medical experts have repeatedly warned that were the virus to spread significantly within the population of 15 million, Zimbabwe’s already crippled health system would collapse, and deaths would spiral.

“The government is afraid of what will happen if the virus becomes widespread,” the source said, “but by making the lockdown indefinite the government has created gaps for individuals in its security forces to abuse power, especially against opposition party members.”