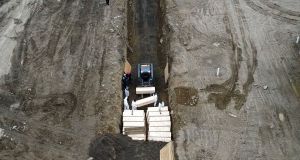 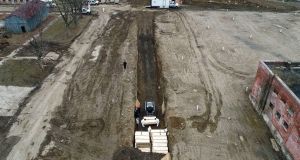 Hart Island is where the city has buried people with no known next of kin. Photograph: AP

New York broke its record for the largest single-day coronavirus death toll for the third consecutive day, Governor Andrew Cuomo announced on Thursday, as he warned the effect of the outbreak on the state’s economy is expected to be more devastating than 9/11.

The beleaguered state also now has more coronavirus cases than any other country outside the US.

New York recorded 799 deaths from coronavirus on Wednesday, bringing the state’s death toll to 7,067. New York has lost about the same number of people to coronavirus as the UK.

It also emerged on Thursday that New York City officials hired contract labourers to bury the rising number of dead in its potter’s field on Hart Island, an area which has for decades been used to bury those with no known next of kin.

As the state mourns the loss, there are also signs that social distancing is flattening the curve.

Yesterday, the state recorded the lowest number of new hospitalizations since the crisis started. The number of ICU admissions and intubations are also down.

“We are saving lives by what we are doing today,” Mr Cuomo said, expressing cautious optimism about signs that the state is flattening the curve of coronavirus cases.

However, the governor warned that the state’s progress could be undone if social distancing practices were relaxed too quickly.

“Remember, the 1918 Spanish flu came in three waves,” Mr Cuomo said. “We’re on the first wave. Everybody is assuming, well, once we get through this, we’re done. I wouldn’t be so quick to assume that. This virus has been ahead of us from day one.”

Mr Cuomo, speaking in his daily briefing, added that the effects of the coronavirus outbreak on the New York economy were expected to be “more devastating” than the September 11th, 2001 terrorist attacks “by far”.

New York state is bracing for a hit to its revenues of between $10 billion (€9.14bn) and $15 billion, with New York city essentially functioning as a ghost town: eerily still with non-essential businesses closed and residents sheltering at home.

The pandemic has brought the American economy to a standstill, with more than 6.6 million having lost their jobs last week.

One positive development was that the number of patients hospitalised with the coronavirus in New York state rose Wednesday by only 200 from the previous day, officials said Thursday, the smallest increase since before the imposition of a state-wide lockdown and another promising sign that the government’s measures may have started working.

But even as the flow of infected people into emergency rooms appeared to level out, more than 18,000 ailing patients - nearly equal to the capacity of Madison Square Garden - were still packed into New York’s hospitals.

While Mr Cuomo welcome these figures, he warned against complacency and insisted that whatever limited progress the state had made would only continue if New Yorkers stayed the course.