Number of jobless claims in US rise by 6.2m in a week to 17 million 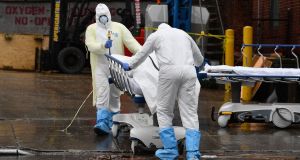 The number of new jobless claims rose by 6.2 million in the United States last week, bringing to 17 million the total number of people who have sought unemployment benefit in the past four weeks.

The stark figures showed the deep economic impact the coronavirus pandemic is having on the world’s largest economy, with approximately 10 per cent of the US labour force now out of work.

The 6.2 million figure was higher than most economists had expected, with a figure closer to 5 million forecast. In more bad news for the economy, the Department of Labor also revised upwards figures for the previous week. While 6.6 million new job claims had been recorded for the week ending March 28th, this was revised upwards to 6.9 million.

Some analysts calculated that the US was now approaching an unemployment rate of 13 per cent – a level not seen since the Great Depression.

But treasury secretary Steve Mnuchin struck a more optimistic note. When asked in a TV interview shortly after the figures were released whether he believed the US economy could reopen in May he replied: “I do.”

But he added that it would happen only when the president, Donald Trump, “feels comfortable with the medical issues” arising from the pandemic.

The Federal Reserve also announced a further $2.3 trillion (€2.1 trillion) in emergency lending for the financial system on Thursday, adding to the suite of liquidity measures including a bond-buying programme already announced by the central bank.

Fed chairman Jerome Powell warned about the rate at which the US economy was deteriorating.

“We are moving with alarming speed from 50-year lows in unemployment to what will likely be very high, although temporary, levels,” he said during a live-streamed event.

The grim economic news emerged as the number of coronavirus cases in the United States continued to rise. Close to 15,000 deaths have now been recorded in the US since February 29th when the first death from the virus was announced in Seattle, Washington.

New York continued to bear the brunt of the crisis, with close to 160,000 cases now reported in the state. More than 799 new deaths in a 24-hour period were reported on Thursday – another one-day high – bringing the total death toll past 7,000.

Governor Andrew Cuomo noted at his daily press briefing that three times as many people had now died in New York from coronavirus than lost their lives in the September 11th terrorist attacks.

“There was no explosion, but it was a silent explosion that just ripples through society with the same randomness, the same evil we saw on 9/11,” he said.

Nonetheless, he pointed to signs that the pandemic may be slowing in the state, highlighting the falling rate of hospitalisations.

However, he warned against complacency, noting that New York is “not prepared to handle” the worst-case scenario.

“The moment you stop following the policies, you will go right back and see that number shoot through the roof, and we are not prepared to handle the highest numbers in those projection models.”

He added: “It is essential we keep that curve flattened because we don’t have an option to handle the curve if it goes higher.”

In neighbouring New Jersey, another 198 people died it was reported on Thursday. The state has the second highest death rate in the country after New York.  Other areas of the country including Louisiana, Illinois and Michigan have also reported sharp increases in cases as the virus spreads.

Meanwhile, efforts to provide an extra $250 billion in lending to businesses stalled in the Senate on Thursday after Republicans and Democrats failed to agree the parameters of the package, with Democrats seeking more money for hospitals and low-income Americans.

Congress already agreed a package of $2.2 trillion last month to help protect workers and businesses as the coronavirus pandemic took hold in America.