Evidence from Dublin Port indicate British visitors are staying away 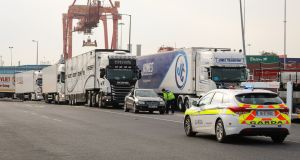 Holy Thursday is traditionally one of the busiest days at Dublin Port as British holidaymakers avail of the long Easter weekend to travel to Ireland. The evidence this year, however, is that people are heeding the public health advice and staying at home.

Barely more than a dozen cars and vans disembarked from two ferries which arrived on Thursday evening from Holyhead and all were waved through by gardaí.

The Stena Line Adventurer was the first to arrive, with just seven cars and vans leaving from the bow. Ten minutes later, the Irish Ferries ship Ulysses arrived, with a few more such vehicles on board. Almost all showed tell-tale signs of arriving in Ireland for business rather than pleasure.

Every small vehicle was stopped by gardaí but none was detained, while a long procession of goods lorries was checked at customs barriers on the way out of the port.

Since legislation was announced on Wednesday which allows gardaí to turn back people who want to visit their holiday homes, there have been anecdotal stories of places like west Cork being full of British visitors and their cars.

The evidence though from Dublin Port would suggest that the vast majority of British visitors and Irish expatriates returning to Ireland from Britain have heeded the warning and stayed away this Easter.

When asked if foreign visitors could be fined under the new regulations, a Garda spokesman referred to comments made by Garda Commissioner Drew Harris on Wednesday who said people should not be travelling.

“If people are currently staying in their holiday homes, that is now considered their place of residence and they should not leave during the current restrictions,” the spokesman said.

There is currently no travel ban between Britain and Ireland, but Irish Ferries has closed all its bars on board its vessels. It has allowed its passengers to change bookings made up to May 31st. Stena Line has a similar policy and passengers can only buy wrapped sandwiches on its services.

Meanwhile, gardaí are investigating the source of threatening posters that were apparently displayed at different locations in a popular west Clare resort town.

The A4 printed pages were posted at various locations in Kilkee including outside mobile home parks and holiday homes. It has also been claimed that the posters were dropped in the letter boxes of local holiday homes in the town.

The posters told holiday home owners to “f**k off” or they might have no holiday homes to return to when the Covid-19 crisis is over.

The page, headed “Kilkee Residents Health Defence”, stated: “Holiday home owners. Stay at home does not mean your holiday pad. We would like you to return to your home. Do the right thing, F**k out of Kilkee NOW! If you do not leave, when the crisis is over, you may not have a holiday home to return to this summer.”

Kilkee Chamber of Commerce has said it “utterly condemns such nonsensical, counter productive and criminal behaviour”.

Concerns had been expressed earlier in the week when it was reported that a large number of holiday home owners had begun to arrive in the town.

Gardaí in Kilrush are investigating the incident and have asked anyone with information to contact them.

Elsewhere in Clare, a larger but less threatening placard appeared on the main Ennis to Lahinch road near Ennistymon. It states: “If you don’t live here – Don’t be here.”