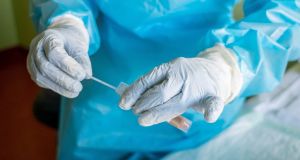 At a briefing for the leaders of the main political parties on Thursday, politicians were told that 52,835 Covid-19 tests had completed laboratory analysis. Photograph: Francesca Volpi/Bloomberg

Opposition politicians have called on the Government to disclose the number of potential coronavirus patients who are waiting to be tested amid confusion about the length of the backlog.

At a briefing for the leaders of the main political parties on Thursday, politicians were told that 52,835 tests had completed laboratory analysis. A PowerPoint presentation said some 51,120 appointments for swabbing have also been “offered”.

Sinn Féin deputy leader Pearse Doherty said he questioned the Health Service Executive during the private briefing about the backlog but was not given clarity. He said the HSE could not say how many of the 51,120 appointments had gone ahead and how many were still waiting to be seen.

Social Democrats co-leader Catherine Murphy, who was also present for the briefing, has also called for an update on the potential backlog.

Questioned on the figure of 51,120 which had emerged after the briefing, the HSE’s chief clinical officer Dr Colm Henry said: “I don’t know where that came from.”

Dr Tony Holohan, the State’s chief medical officer, told a daily Covid-19 briefing that in some cases “the testing process wasn’t as quick as we would like,” due to issues getting samples analysed.

He said delays in the process could continue for several days. “During the course of next week I expect that we’re in the position ... whereby our supply of testing is in excess of the demand that we have,” he said.

Elsewhere, public-health expert Dr Gabriel Scally has called for the introduction of temperature screening, and potentially testing of individuals, at the State’s ports and airports if restrictions are to be lifted.

Dr Scally, who authored the report into the CervicalCheck scandal last year, told The Irish Times that to properly run a testing and contact-tracing system necessary to allow for relaxation, “there’ll have to be attention paid to ports and airports”.

“There’ll have to be new procedures put in place at ports and airports, particularly for people coming from hotspot areas, for example people coming in from New York at the moment, and that will require testing capacity to be available to test those people. To check them for temperature on arrival, but also if there are doubts or for people from a particular hotspot area, to test them as well,” he said.

As concern continues over the Border as a possible weak point in the State’s coronavirus defences, the North’s Public Health Agency announced on Thursday the number of people who had died from coronavirus in Northern Ireland had risen by four to 82.

The agency also reported there were 138 new confirmed cases of Covid-19, bringing the total number in the North to 1,477. A total of 10,203 people have been tested for the virus.

Concern has been heightened this weekend about cross-Border traffic, with one infectious disease expert saying the Easter period could be “Ireland’s Cheltenham” in terms of Covid-19 contagion.

Dr Paddy Mallon said the Government acted at the right time, unlike in the UK where an event such as Cheltenham was allowed proceed. Consequently, there were now “tens of thousands” of cases.