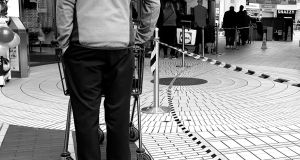 A system of basic income – long advocated by Social Justice Ireland – would go a considerable distance towards ensuring that everyone has enough money to live life with dignity. Photograph: John Fleming

The Covid-19 pandemic has caused the most fundamental economic and social shock that most of us have ever experienced. Our economy and society have changed irrevocably, and we face into an uncertain future. Amid the current crisis, there are some changes for the better and we must seize the opportunity to harness positive changes that have been made and reimagine our social contract to build a better Ireland for everyone.

The Government has introduced a series of temporary measures to mitigate the worst impacts of the pandemic including a Covid-19 unemployment and illness payment of €350 per week. The increase in the emergency social welfare payment is an acceptance that the rate of €203 per week is simply not enough for people to survive on. The crisis and its impact on the economy and society mean that in the long term we must reconceptualise the interaction of employment and work, taxation and welfare, and give serious consideration to policies such as a universal basic income.

A system of basic income – something long advocated by Social Justice Ireland – would go a considerable distance towards ensuring that everyone has enough money to live life with dignity. It would place an income floor underneath every individual, which can be relied upon regardless of changing circumstances, while also structuring Ireland’s welfare system in a way that better meets the needs of the modern economy, increasing flexibility for individuals of working age and reducing inequality in society. It would integrate and reform our tax and social welfare systems and is especially relevant at the present moment of upheaval. We know from experience that rising tides do not lift all boats, and Ireland’s persistent problem with low pay and in-work poverty exposes claims that a job is the best poverty fighter. Irish society needs a radical approach to ensure the inclusion of all people in the benefits of present economic growth and development. Basic income is such an approach.

Actions which could not be countenanced mere months ago have been introduced to mitigate the impacts of the pandemic. Emergency powers have been introduced to limit the constitutional protection of property rights and restrict tenant evictions. Our housing crisis, which was already having a devastating impact on people’s lives, is now also having an impact on the ability of thousands of people to protect themselves in the midst of a pandemic. Social distancing is difficult for overcrowded households with multiple generations under one roof, and simply impossible for those living in emergency accommodation, direct provision and refuges for domestic abuse. Ireland needs more social housing. Bold moves, such as large-scale investment in public housing, are required to protect all people at this time, and the vulnerable cannot be left further behind. A new government should set a target of 20 per cent of all housing stock (the EU average) in Ireland to be social housing. An increase in the overall stock of social housing would also assist the development of an affordable rental and cost rental system in Ireland by reducing subsidies to the private rented sector which contribute to falsely inflated market rents.

We have also seen the State commit to paying the wages of childcare workers in recent weeks because of the current crisis. We have nationalised this sector, albeit temporarily. A new government can improve quality services for children and families and separate affordability for families from the wages and professionalisation of the sector. This would require a new funding model for the sector, but it would allow childcare providers to focus on improving and expanding the provision of high-quality services for families.

Recent events have demonstrated that our public services and social welfare supports are essential assets when faced with an unprecedented crisis. Public spending in these areas is an investment, not a liability. A lesson from past experiences of economic shock and recovery is that the weakest in our society get left behind. We must learn from this lesson. TK Whitaker once noted that “there are values, moral and intellectual, which are higher than just mere economics. But it makes for a happier and more contented society if everybody has some basic share in wealth and wellbeing.” We have an opportunity to build on some of the positive changes that have been made to ensure everybody has and will continue to have a basic share in our wealth and wellbeing, now and into the future. We have an opportunity to write a new social contract. There is no time to waste.