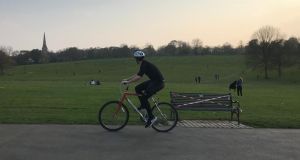 Public benches taped off in Brockwell Park in London. The chancellor of the exchequer, Rishi Sunak, says the scientific data needed to assess the impact of the lockdown will not be available until next week. Photograph: Reuters/Reade Levinson

Senior ministers and the leaders of Britain’s devolved institutions will on Thursday discuss the coronavirus lockdown after a further 938 deaths were recorded on the country’s worst day since the crisis began.

Chancellor of the exchequer Rishi Sunak said the scientific data needed to assess the impact of the lockdown would not be available until next week. However, Welsh first minister Mark Drakeford said there was no question of lifting the restrictions in Wales when their initial three-week period ends after Easter.

“These restrictions will not end then. We will not throw away the gains we have made, and the lives we can save, by abandoning our efforts just as they begin to bear fruit,” he told the Welsh assembly.

As Boris Johnson was due to spend a third night in intensive care at St Thomas’ hospital in London on Wednesday night, Mr Sunak said the prime minister’s condition was improving.

“I can also tell you that he has been sitting up in bed and engaging positively with the clinical team,” the chancellor said.

Mr Johnson was admitted to hospital on Sunday, 10 days after testing positive for the coronavirus, with persistent symptoms of a cough and a high temperature. He was moved into intensive care on Monday after experiencing difficulty breathing, and has received oxygen treatment but has not required a ventilator.

The latest reported deaths brings Britain’s death toll from coronavirus to 7,097, and Wednesday’s 938 deaths are close to the worst daily figures reported in other European countries – 969 in Italy on March 28th, and 950 in Spain on April 2nd.

However, the number of people hospitalised because of the virus have stabilised over the past four days, and Stephen Powis, the medical director of NHS England, said the social distancing measures introduced last month were starting to have an impact.

“And if it starts to spread again in a week or two’s time we will be seeing a set of figures which are not going in the direction that we want to see them. We will see increased pressure on the NHS, we will see increased numbers of deaths,” he said.