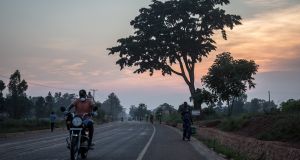 Speaking in an address to the nation on Wednesday night, Yoweri Museveni said: “I am having problems with my indisciplined security people who like beating people . . . Beating people is not part of security work . . . Even cows, we don’t beat them these days.”

On April 2nd, security forces dragged people out of houses in Elegu, a town on the border with South Sudan, at around 8pm – an hour after the beginning of a new coronavirus-related curfew.

Images shared on social media showed some of the women afterwards. They were standing together covered in mud. One had her head bandaged while another displayed bruises on her back and buttocks. Another man had a fractured arm, according to later reports.

Opposition politician and popstar Bobi Wine, who plans to run for president in next year’s election, accused the security forces of using coronavirus “to satisfy their appetite for violence”.

“These women, plucked out of houses in Elegu, were brutalised in the night. Forced to roll in mud, beaten and ordered to smear mud in private parts as officers laughed,” he said on Twitter.)

Uganda’s police force said 14 police and military officers had been arrested following allegations of “aggravated torture” against 38 men and women. On April 7th, the accused were taken to prison in Gulu, northern Uganda.

In a statement, Fred Enanga, spokesman for Uganda’s joint security task force, condemned “the outrageous and gross acts of misconduct”.

There is evidence already that lockdown measures in Uganda, and other African countries, are leading to abuses against civilians. In Gulu, locals accuse security forces of taking advantage of the situation to hurt and extort people who are desperate.

“It was life or death. I’m glad I have my life,” said one man who claimed he was beaten up by soldiers and police after the curfew a few days ago, saying they searched his pockets and robbed him of his phone and a month’s salary.

“A hungry person is unruly,” said his girlfriend, complaining that the most vulnerable, who need to break government rules to feed their families, are the worst affected.

Opio Denis, a 26-year-old motorbike mechanic, said he was sitting with three friends at around 11am one day last week when soldiers began ordering them to sit four metres apart. Frightened, he ran away but the soldiers chased him. “They beat me seriously, slapping me. They caned me with a stick.” As he spoke, one of his eyes remained half closed, the result, he said, of being hit in the face.

“They searched my pockets and took 15,000 Ugandan shillings (€3.60),” some locals’ daily income. “People saw what happened but they can’t do anything.”

1 The human cost of Covid-19: new figures reveal the toll on Ireland's care homes
2 Emily Maitlis thanks BBC viewers for support after Cummings row
3 ‘Ireland should take calculated risk’ in greater easing of Covid-19 restrictions
4 Miriam Lord: Taoiseach is trapped in a Zoom session from hell
5 New rules for arrivals to Ireland start today - what is changing?
Real news has value SUBSCRIBE