Coronavirus: 6.6m Americans file for unemployment in a week 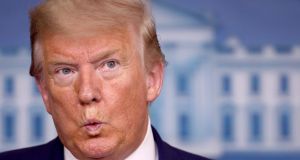 US president Donald Trump: states crucial to his success in 2016, such as Pennsylvania and Ohio, have been badly hit. Photograph: Win McNamee/Getty

The number of Americans signing up for unemployment benefits soared last week, reflecting the deep impact the coronavirus crisis is having on the US economy.

Some 6.6 million workers filed for unemployment insurance last week, according to the department of labour. Together with the 3.3 million new unemployed the previous week, more than 10 million workers have now lost their jobs as the pandemic has spread across the US, forcing the widespread closure of businesses, schools and events.

The number of unemployment claimants in one week has never before surpassed 700,000.

The alarming data – which broke all previous records and surprised analysts, who had been expecting a smaller jump – laid bare the deep economic toll the pandemic has unleashed on the world’s largest economy.

Electorally important states such as Pennsylvania and Ohio, which backed Mr Trump in the 2016 presidential election, saw particularly steep rises in unemployment claims, suggesting that low- and middle-income earners were most hit.

As the deaths from coronavirus globally passed 50,000, the United States continued to have the highest number of reported cases in the world, with more than 217,000 people now infected.

New York continued to be the epicentre of the US outbreak, with more than 2,300 deaths confirmed. Speaking on Thursday, governor Andrew Cuomo pointed to a troubling increase in cases in Long Island, even though he noted, on a more positive note, that the number of patients being discharged from hospital was rising.

The Javits Center in Manhattan and Central Park have become field hospitals as the city tries to contain the spread of the virus. Mr Cuomo also warned that New York could run out of ventilators in six days, as he stressed the urgency of securing proper equipment to treat patients and protect medical staff.

The lack of ventilators across the United States has emerged as a key challenge for the country as it deals with a surge in cases. The country’s top immunologist, Anthony Fauci, said this week that the US death toll from the virus could reach 240,000.

There were reports that some ventilators sent to states by the federal government did not work and needed maintenance, adding to the supply problem.

As the number of cases outside New York continued to rise, several states that had been resisting imposing restrictive measures reversed course and ordered stay-at-home orders.

Florida governor Ron DeSantis has issued a state-wide order, announcing strict social-distancing orders that will take effect on Friday. Georgia governor Brian Kemp also ordered people to stay at home, saying that he only learned in the previous 24 hours that coronavirus could be transmitted by people not showing symptoms.

In a statement, the convention’s chief executive, Joe Solmonese, said organisers would continue to monitor the situation.

“In our current climate of uncertainty, we believe the smartest approach is to take additional time to monitor how this situation unfolds so we can best position our party for a safe and successful convention,” he said. “Ensuring the safety of the convention’s host community and all convention-goers has been – and always will remain – the top priority of the Democratic National Convention Committee.”

The Democratic National Committee has still not ruled out holding the convention virtually. The decision to postpone the multimillion-dollar event was taken after front runner Joe Biden said this week that it should be delayed.

Vermont senator Bernie Sanders remains in the race, despite Mr Biden opening up a formidable lead. Several states have deferred their primary contests scheduled in the coming weeks ahead of November’s election.