Government sends out 10,000 volunteers in effort to contain virus ahead of flu season 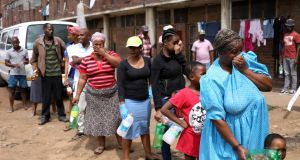 Residents of Madala Men’s Hostel in Alexandra, South Africa cover their noses as they wait to collect sanitiser from health workers on Wednesday. Photograph: Siphiwe Sibeko/Reuters

South Africa’s government has mobilised 10,000 volunteers to roll out coronavirus screening nationwide, as it ramps up efforts to contain the spread of the disease in rural areas and densely-populated townships ahead of the coming flu season.

On Wednesday the first of 67 new mobile sampling and testing clinics began working in Alexandra in Johannesburg, South Africa’s oldest township, where cases of Covid-19 have recently been confirmed.

Over the coming days thousands more community health workers, nurses and NGO staff will be deployed to lead a massive screening programme among South Africa’s population of 57 million. It aims to identify Covid-19 hotspots, then quarantine and treat the people who test positive for the disease.

There are major concerns that the virus will exert a heavy death toll on South Africa’s poor, as social distancing is particularly difficult to adhere to in the tightly packed informal settlements and townships where they live.

Health minister Zweli Mkhize told reporters on Wednesday that the government’s testing capacity had been increased to 5,000 tests in 24 hours, but the new mobile laboratories were expected to boost this to 30,000 a day.

While the government has said it is too early to assess the impact of the three-week nationwide lockdown it imposed at midnight last Thursday, South Africa’s first week of mass isolation has coincided with a slower than anticipated spread of the disease.

Mr Mkhize told reporters earlier this week that officials had anticipated between 4,000 and 5,000 confirmed infections by April 2nd.

But according to the latest figures from the National Institute for Communicable Diseases, the number of confirmed Covid-19 cases in the country stood at 1,380 on April 1st. Up to that date 44,292 people have been tested for the disease.

During the latter half of March there were well over 100 new cases of Covid-19 recorded most days, but since Monday these figures have fallen back to double digits. Confirmed new infection tallies for Tuesday and Wednesday were 46 and 27 cases respectively.

The virus has spread to all nine South African provinces and claimed the lives of five people to date, putting the current mortality rate in South Africa at 0.37 per cent – well below what many countries are experiencing.

Among the five deceased is South Africa’s world-renowned HIV/Aids scientist Gita Ramjee, who reportedly died from complications from contracting Covid-19.

However, Mr Mkhize warned that the flu season in the weeks ahead could bring with it a much worse picture.

“This will flood our hospitals and clinics and create a fertile ground for the coronavirus to spread or to be masked in its presentation. This means with this small growth in numbers [this week] we may be experiencing the calm before the devastating storm,” he said on Wednesday.

Under the government’s three-week lockdown, which ends on April 16th, most people are prohibited from leaving their homes, unless for essential purposes such as food shopping. It does not apply to those providing essential services.

The authorities have struggled to get some township residents to obey the new regulations on curtailed movement and social distancing.

Police and soldiers tasked with enforcing the lockdown have come in for sharp criticism for using a heavy-handed approach with citizens in some areas, despite being publicly asked not to by the president, Cyril Ramaphosa, before they were deployed.

Local media have reported that three township deaths in the last week can be blamed on security forces using excessive force when trying to get people who refused to isolate themselves to stay indoors.