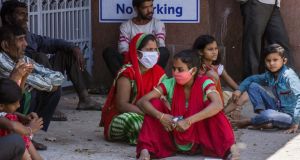 The lockdown enforced across India for its 1.3 billion people to try to combat the coronavirus pandemic has revealed a glaring class divide in which the country’s economically underprivileged continue to be worst hit.

Ever since it was imposed by prime minister Narendra Modi on March 24th, the nationwide clampdown – in place up to mid-April – has impacted tens of millions of the country’s poor migratory labourers, who are struggling to survive in the face of critical food shortages.

Sacked overnight from their jobs, a sizeable proportion of about 173 million migratory workers have been left without money, food or shelter as many walk hundreds of kilometres to their villages.

As the state had no contingency plans for them when the lockdown was announced, a large number today face the bleak prospect of death by virus or death by hunger.

They have decided to face that situation in familiar surroundings where they grew up, before leaving for the cities in search of employment.

They also believe that in urban India they stand little chance of surviving in a lockdown by securing adequate rations or medical assistance.

Meanwhile, social distancing for the millions who have no villages to return to is impossible. The urban poor live cheek by jowl in city slums, where the lanes are too narrow for two people to walk abreast and where, as in some areas in Mumbai, there is one toilet for 1,500 people and no water at all to drink, wash their hands or bathe.

The privileged and middle-classes, on the other hand, in India’s metropolises and smaller cities and towns continue to live cosseted existences, hoarding food supplies, with many household staff prevented from leaving their premises attending on them.

They work from home, using modern technology, while their social and economic clout ensures they are supplied with curfew passes and ease of movement in the lockdown.

There were reports last week that wives of senior officials in the upmarket city of Chandigarh, 250km north of New Delhi, had demanded curfew passes for beauticians and pedicurists to visit them at home, but were declined.

“It is unfortunate that all crises in India always seem to impact the poor in the worst negative way possible,” said M A Kamal, an anthropology professor at Krea University in southern Andhra Pradesh state.

He said that a majority of coronavirus cases had emerged from “rich and privileged” neighbourhoods, as their inhabitants had recently been abroad. After their return they infected the less advantaged who came into contact with them.

Not all south Asian countries have taken the same unmindful approach to the lockdown as India.

The Bangladesh government, for instance, warned its population of more than 164 million that it would shut down public transport a week before it actually did so – giving many migrant workers, unlike in India, a chance to get home.

Up to Thursday evening India had 1,965 confirmed coronavirus cases, of which 151 had recovered and 50 had died.