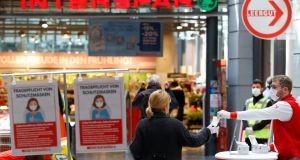 A protective face mask is handed over to a customer of a Spar supermarket during coronavirus outbreak in Vienna, Austria on Wednesday. Photograph: Leonhard Foeger/Reuters

When Austrian chancellor Sebastian Kurz introduced a public ban on headscarves and veils in 2017, he described such head and face coverings as a “symbol of a counter-society”.

Now Kurz is leading the Austrian avant garde once more – in the other direction. From Monday, if you refuse to cover your face in Austria, you can’t go shopping for food.

“It’s clear that masks are something alien to our culture,” said Kurz, announcing the latest coronavirus regulation. “It will be a big adjustment but it is necessary, we’re taking this step to reduce further the spread of the virus”.

Given Kurz has changed his mind before on headscarves and face coverings, ordinary Austrians have taken the new policy in their stride.

Student Dominik Heide was more sceptical: “Perhaps it makes sense inside where people are gathered but it’s not necessary outside.”

As well as masks in supermarkets, the new regulation obliges all police to wear masks in public. Conservative estimates envision a daily requirement of three million masks.

Given global shortages in protective gear, retailers have asked customers, where possible, to bring their own mask or scarf. They have already begun distributing free to customers all masks they can source but, at a price of 40 cent to 80 cent each, they expect the government to reimburse them later.

“There are still thousands of small retailers without them,” said Peter Buchmüller of Salzburg’s chamber of commerce. “How they will get their masks is a big question and how can we distribute three million masks a day – where will they come from?”

As well as cost and logistic questions, not everyone is convinced the masks make a difference to public health. Current World Health Organisation guidelines recommend masks for those who are sick but say there is no specific evidence of any benefit from widespread mask-wearing. With no boost to public health, it said the main effect is psychological.

Some Austrian doctors are concerned that few will heed the golden rules of wearing a mask: don with disinfected hands, without touching the main mask. Others fear that mask-wearers might feel more protected than they are and become lax in other measures to reduce virus transmission.

Announcing the policy, Kurz insisted the masks being distributed were not medical grade and had limited effect. Social distancing and hand-washing, he said, remained the most effective virus prevention measures.

But his early move has increased pressure on other countries to follow suit. Some medical journals have carried papers giving cautious backing for widespread mask use, in particular because it reduces the likelihood of someone without symptoms spreading the virus unwittingly.

Leading the mask sceptics in Germany is Dr Hendrik Streeck, head of the University of Bonn’s Virology Institute.

“There is no danger of infecting someone when you’re shopping,” he said, noting that Europe’s main super-spreader events were social events such as parties and sport events. “Infection didn’t come from supermarkets or butchers or restaurants. It came from long periods together in closed spaces.”

While the eastern German city of Jena has become the first to introduce a mask rule for two weeks, chancellor Angela Merkel remains unconvinced. She told a meeting with state governors on Wednesday that masks themselves can become a virus risk after half an hour, when they become saturated with breath condensation.

Austria has nearly 11,000 confirmed cases of coronavirus, according to official figures yesterday, with 162 registered deaths to date. Germany has 75,000 cases and more than 900 deaths.