Economic picture ‘very bad’ and Ireland is facing into a recession, Taoiseach says

Taoiseach Leo Varadkar has warned that the economic picture is “very bad” and that Ireland is facing into a recession. Video: RTÉ 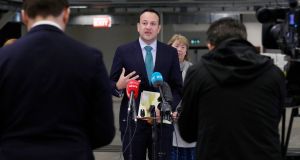 “We are facing a public health emergency which in turn is leading to an economic recession.” Mr Varadkar said. Photograph: Leon Farrell/Photocall Ireland/PA Wire

A decision will be made towards the end of next week on whether or not to relax the current restrictions imposed on the public to halt the spread of the coronavirus, Taoiseach Leo Varadkar has said.

Mr Varadkar has also warned that the economic picture is “very bad” and that Ireland is facing into a recession.

“We are facing a public health emergency which in turn is leading to an economic recession.”

He said the economy is “in hibernation” but the Government is working on plans for an economic recovery.

Mr Varadkar said the objective is to “avoid another era of austerity.”

He also signalled that taxes could be cut to stimulate the economy but that Ireland needs to have the capacity to borrow at rates that are affordable, and the Government will not know if this is possible until the full picture emerges.

A Cabinet sub-committee met on Thursday to consider the latest modelling on the spread of coronavirus.

While there has been progress in flattening the curve of cases, Mr Varadkar said there was a “slight uptick” in the rate of increase of new cases today but cautioned against reading into one single day.

He said that rate of increase must be lowered to five per cent or less in order for the health service to adequately cope.

In relation to the Government restrictions on movement and travel, Mr Varadkar said it will be the end of next week before the National Public Health Emergency Team can make any recommendations.

Furthermore, the easing of restrictions will also be dependent on the establishment of a robust contact tracing system.

The Taoiseach said he was satisfied with the current capacity of the health service to deal with the health emergency.

There are 109 patients in intensive care units and there is capacity to ventilate around 1,200 people at any one time.

On the issue of childcare for frontline workers, Mr Varadkar said he hoped the Government could provide this in the coming days.

“It will probably be in the form of childcare in the home rather than opening up creches because there will be risks involved with that. We don’t want to do anything that might cause the virus to spread.”

On State exams, he said the plan is that they will go ahead and said that the Government wanted to see students start in college as they had planned.

“I would encourage anyone studying for their Junior Cert and Leaving Cert to continue to do so.”

Furthermore, he acknowledged that there is pressure on the testing services for Covid 19 and said that “we are not where we want to be”. He has asked the HSE to provide him with a report by next Monday containing a roadmap on how to increase testing and address any issues.

An incorporeal Cabinet meeting was also held on Thursday to approve the decision to defer the new system of allocation of special needs assistants.

There was also Cabinet approval to extend indemnity to private hospitals and certain labs.

The Taoiseach also said that in terms of supply chains, there is a solid and secure supply but there were “minor issues around the economic viability of some shipping routes and air cargo routes.”

1 Coronavirus: One more death in Republic as expert warns house parties are ‘disaster’ for containment
2 ‘Frustrated and angry’: Thousands march in Dublin to protest death of George Floyd
3 Search underway for missing boy (5) in Lough Mask, Co Mayo
4 Schools may reopen in July for children with special needs
5 US protest violence is being blamed on extremists. Who are they?
Real news has value SUBSCRIBE