‘Putin is crazy’: Russian leader lambasted over US coronavirus aid 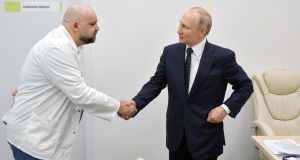 Russian president Vladimir Putin with chief physician Denis Protsenko during a visit to a hospital treating coronvirus patients on the outskirts of Moscow on March 24th. Photograph: Alexey Druzhinin/Kremlin/Reuters

Moscow has flown medical equipment to the United States in a show of “solidarity” in the fight against coronavirus, but critics called the move a cynical public relations stunt and a dangerous drain on supplies in Russia.

The delivery came as President Donald Trump’s administration struggles to cope with the US outbreak of Covid-19, and the Kremlin seeks his help to revive world oil prices and lobbies for an end to economic sanctions imposed on Russia during its six-year undeclared war against Ukraine.

“This is solidarity in action – together we will overcome!” tweeted Dmitry Polyanskiy, Russia’s deputy permanent representative to the United Nations, as a military cargo plane from Moscow landed in New York on Wednesday after a stop in Shannon.

“My country reaches out a helping hand to the people of the US. This is a historic moment and continuation of a centuries-old tradition,” said Anatoly Antonov, Russia’s ambassador to the US. “Now is not the time for quarrels. We can provide emergency equipment needed to save Americans.”

The US count of more than 216,000 confirmed cases of Covid-19 and about 5,000 deaths dwarfs the scale of the outbreak in Russia, where 3,548 people are known to have been infected and 30 people have died from the virus.

Officials admit those figures understate the real size of the outbreak in the world’s largest country, however, and critics lambasted Russian president Vladimir Putin for exporting supplies just as the nation’s infection rate accelerates and medics complain of severe shortages of vital equipment.

“I thought this was a stupid April 1st joke, but it turned out to be true that Russia really has sold masks and medical equipment to the US, at a time when doctors and nurses across the entire country are left without masks and infect each other,” anti-corruption campaigner and protest leader Alexei Navalny said on Thursday.

Mr Navalny and the Doctors’ Alliance, a union of Russian medical workers, noted that the US said it had purchased the supplies from Moscow, while Russian officials described the shipment as “humanitarian aid.”

“Well, that’s great. We are collecting money from the whole country to buy protective equipment for our medics, and our authorities are selling it in the US,” the Doctors’ Alliance tweeted. “It’s simply mockery.”

When Mr Putin sent military trucks flying Russian flags to Italy last month to distribute medical supplies, critics accused Moscow of using the crisis to burnish its reputation in a country that has long been sceptical of EU sanctions against the Kremlin.

Russia dismissed such claims, and denied reports in La Stampa newspaper that 80 per cent of the equipment was “totally useless or of little use to Italy”.

Mr Trump described Russia’s offer of supplies as “very nice” earlier this week, when he and Mr Putin agreed to “work closely together” through the G20 group of states to combat coronavirus and its economic impact, and discussed ways to lift world oil prices from near 20-year lows.

In a video conference of G20 leaders last week, Mr Putin argued for a moratorium on “restrictions placed on essential goods as well as financial transactions to purchase them”.

Russia is also urging the United Nations general assembly to back a “solidarity” resolution on Covid-19 efforts that includes a call to halt all non-UN economic sanctions.

Ukraine insists sanctions should only be lifted when Russia ends its occupation of Crimea and a war in eastern Ukraine that has killed 14,000 people.

“When certain sides use the pandemic for political goals and call for the removal of sanctions, it should be seen as dirty manipulations and attempts to benefit from the suffering of millions,” said Sergiy Kyslytsya, Ukraine’s permanent representative to the UN.