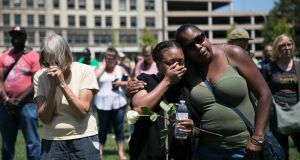 The death toll from Sunday morning’s mass shooting in Dayton, Ohio, may have been higher if police officers had not responded to the attack within minutes, authorities said.

Nine people were killed in the early hours of Sunday after a 24-year-old gunman went on a shooting rampage before responders shot and killed him.

The attack took place at about 1am in the city’s Oregon district, a popular nightlife spot. The attacker, who was wearing full body armour, was approaching a bar in the area when he was shot by police.

Dayton deputy director and assistant chief of police Lieut Col Matt Carper said police had neutralised the subject within a minute, suggesting that more people could have been killed.

The nine people killed in the attack included the gunman’s 22-year-old sister. The victims ranged in age from 22 to 57. Six were African-American and three were white. Authorities said they were still trying to determine a motive for the attack, but said it was unlikely that the gunman targeted his victims because of their race.

“It’s hard to imagine that there was much discrimination in the shooting,” Lieut Col Carper said. “It happened in a very short period of time.”

The Dayton attack unfolded less than 13 hours after a gunman opened fire in the border city of El Paso in southern Texas. A total of 20 people were killed. A 21-year-old white male is being held by police having apparently surrendered after the attack.

The mass shooting on Saturday afternoon is the biggest in Texas since November 2017, when 26 people were killed in a church in Sutherland Springs, close to San Antonio.

The weekend carnage brought to a close one of the most deadly weeks on record for mass shootings in the United States, after three people were killed and 13 injured at a garlic festival in California on July 28th.

The spate of violence prompted calls from Democrats for tighter gun-control laws, with several senior political figures calling on Senate majority leader Mitch McConnell to reconvene the Senate, which is currently on recess, to deal with the issue.

In March, the House of Representatives passed a Bill which would significantly tighten background checks for those purchasing weapons, but the legislation has not yet been taken up by the Senate, which is controlled by Republicans.

“I hope that senator McConnell would bring the Senate back tomorrow and pass the background check Bill and send it to the president. The president must sign it. Period,” said Ohio congressman Sherrod Brown. “The House of Representatives has passed background check legislation, the Senate could meet tomorrow.”

Several Democratic presidential candidates weighed in on the issue, which is likely to become a central issue in the 2020 campaign.

Asked by CNN if he thought President Trump was a white nationalist, Beto O’Rourke, a Democratic presidential contender from El Paso, said: “Yes, I do.” Pointing to Mr Trump’s description of Mexicans as “rapists” and asylum seekers trying to enter the US as an infestation, he said: “The things that he has said both as a candidate and then as the president of the United States, this cannot be open for debate.”

Pete Buttigieg, the 37-year-old mayor of South Bend, Indiana, also said Mr Trump was encouraging white nationalism. The president had “made his career, politically, on demonising Mexicans and now we’re seeing reports that the shooter yesterday had his goal as killing as many Mexicans as possible,” he said.

But acting White House chief of staff Mick Mulvaney strongly defended the president in an interview on Sunday, disputing that there were any links to politics.

“This is not appropriate. This is way beyond the pale. These are sick people,” he said of the gunmen.

Flags flew at half mast at all public buildings on Sunday. In a statement, the president said: “We condemn these hateful and cowardly acts. Through our grief, America stands united with the people of El Paso and Dayton. May God be with the victims of these two horrific crimes and bring aid and comfort to their families and friends.”