Kremlin turns up heat on Navalny as protests continue in Moscow 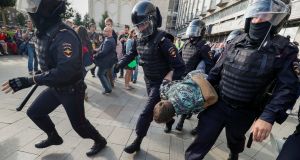 Law-enforcement officers detain a participant in a rally calling for opposition candidates to be registered for elections in Moscow. Photograph: Shamil Zhumatov/Reuters

Russian law enforcers have opened a new front in the Kremlin’s battle with Alexei Navalny on Saturday accusing the opposition leader’s anti-corruption foundation of participating in a billion-rouble (€13.8 million) criminal money-laundering scam.

The announcement appeared timed to coincide with an opposition rally in Moscow where protestors took to the streets for the fourth weekend in a row to demand free and fair elections. More than 800 people were arrested.

Russia’s investigative committee announced the launch of a criminal probe into the alleged laundering by Navalny’s Foundation for the Fight Against Corruption of about a billion roubles through Moscow ATMs.

“Employees of the foundation had received a large sum of money in roubles and foreign currencies from third parties which they knew had been obtained illegally,” the investigative committee said in a statement. “Investigators would take all necessary steps to establish the identity and arrest all participants in the crime.”

Navalny, widely seen as Russia’s most charismatic opposition leader, is serving a 30-day prison sentence for inciting people to protest so was unable to join Saturday’s rally that took the form of a ‘gulyanie’, or walk-about on Moscow’s leafy boulevards.

Organised by a group of opposition activists who have been barred from the ballot at an upcoming Moscow city parliament poll, the “Give Us Back Elections” event had been declared illegal by the authorities.

Arrests began immediately with riot police clad in helmets and flak jackets pulling people out of the crowd apparently regardless of whether they were genuine protestors, journalists, rights activists or passers by who had stopped to watch the spectacular show of force. Other officers linked arms to march in close formation driving the crowds away.

With Navalny and several other prominent opposition activists in jail, Lyubov Sobol, a lawyer for the Foundation for the Fight Against Corruption has become the leading light of the election protests. But the 31-year-old activist did not make it to the rally. Police seized her outside her office and drove her around Moscow for a full three hours on Saturday afternoon.

Russian investigators are trying to pin some protestors with charges of mass rioting an offence punishable with up to eight years in prison. Ms Sobel revealed in a tweet on Sunday that she had been named as a witness in one such case, an unenviable position.“I’m not afraid and do not intend to give up,” she said.

Law enforcers also turned up the heat on other close associates of Navalny. Ivan Zhdanov and Konstantin Yankauskas both completed eight-day prison terms for organising unauthorised public meetings on Saturday but were arrested again on further charges as they stepped out of a Moscow detention facility.

Anton Pominov, general director of Transparency International, said investigators might struggle to stand up a money-laundering case against the Foundation for the Fight Against Corruption. The criminal allegations could be assessed as a political matter considering recent events.”

Ms Sobel said the foundation was ready to help protestors arrested at the rally pay police fines and file appeals in the European Court of Human Rights.

In St Petersburg, Russia’s second-biggest city, at least 1,000 people rallied in Lenin Square to show solidarity with the Moscow protests. Police arrested an opposition activist for shouting an anti-Kremlin slogan, but for the most part the event, which had been agreed with the authorities, passed peacefully.