‘People were panicking and running, saying that there was a shooter’ 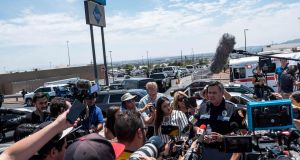 An El Paso police department official briefing media. ‘People were panicking and running, saying that there was a shooter. They were running close to the floor – people were dropping on the floor,’ an eyewitness said. Photograph: Joel Angel Juarez/AFP/Getty Images

At least 20 people are dead and 26 injured in a mass shooting at a busy Walmart store in the Cielo Vista Mall complex in the US border city of El Paso, Texas.

A 21-year-old white male from Allen, a suburb of Dallas more than 600 miles away, was taken into custody after surrendering to officers. El Paso police chief Greg Allen said a “manifesto” was being investigated in connection with the suspect, and the shooting was being investigated as a potential hate crime.

Police started receiving reports of a shooting at 10.39am local time on Saturday. Soon after, the police department tweeted that officers were responding to an active shooting scene and that people were advised to stay away from the area around the Cielo Vista Mall complex, located south of El Paso international airport.

Citing a law enforcement source, El Paso television station KTSM published on its website what it said were two photos of the suspect taken by security cameras as he entered the Walmart. The images showed a young white man wearing glasses, khaki trousers and a dark T-shirt, and pointing an assault-style rifle. He appears to be wearing headphones or ear defenders.

Eyewitnesses described hearing a noise that sounded like balloons popping, before seeing the shooter in the store. Kianna Long, who was at the Walmart with her husband, told Reuters people were running for their lives. “People were panicking and running, saying that there was a shooter. They were running close to the floor – people were dropping on the floor,” she said. Long and her husband sprinted through a stock room at the back of the store before sheltering with other customers in a steel container in a shipping area.

Ryan Mielke, a University Medical Center hospital spokesman, said 12 people were rushed to the hospital, one of whom died. All of the victims suffered traumatic injuries. Two children, aged two and nine, were stabilised at the medical centre before being transferred to the neighbouring El Paso children’s hospital. Del Sol Medical Center said it was treating 11 other patients. The victims have not been named.

El Paso is located in western Texas, right on the border with Mexico. The diverse city has about 680,000 residents, and its population is 80 per cent Latino. Its Mexican twin city, Ciudad Juarez, sits directly across the large barrier that divides their downtown areas. More than 23,000 pedestrians cross from Ciudad Juarez to El Paso to work every day.

The Walmart store was busy with families shopping for the new school year. Police estimated there were up to 3,000 customers and 100 staff in the store.

President Donald Trump tweeted about the “terrible shootings” that were “very bad, many killed,” adding: “God be with you all!”

Beto O’Rourke, the Democratic 2020 presidential candidate and former El Paso congressman, said he would leave the campaign trail to head back to the city. “I am incredibly saddened and it’s very hard to think about this,” he said. “El Paso is the strongest place in the world. This community is going to come together. I’m going back there right now to be with my family, to be with my home town.”

El Paso’s police chief described the shooting as a capital crime, for which a person convicted could receive the death penalty in Texas.

“We are going to aggressively prosecute it both as capital murder but also as a hate crime, which is exactly what it appears to be,” Texas governor Abbott told reporters. El Paso and Ciudad Juarez, together with the neighbouring city of Las Cruces, New Mexico, form a metropolitan border area of some 2.5 million residents constituting the largest bilingual, binational population in North America. – Guardian News and Media/Reuters