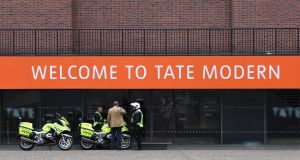 Police officers outside the Tate Modern gallery in London after an incident involving a child falling from height and being airlifted to hospital. Photograph: Daniel Sorabji/AFP/Getty Images

A 17-year-old male has been arrested on suspicion of attempted murder after a six-year-old boy was thrown from a 10th-floor viewing platform at the Tate Modern in London, the Metropolitan Police said.

The boy thrown from the viewing platform is critically ill in hospital, the Met said.

“The six year-old victim was found on a fifth-floor roof. He was treated at the scene and taken to hospital by London’s Air Ambulance, ” the force said.

It added: “A 17-year-old male had remained with members of the public on the 10th-floor viewing platform. There is nothing to suggest that he is known to the victim. The teenager was arrested by police officers on suspicion of attempted murder and taken into police custody.

“A number of members of the public are assisting police with witness statements. Visitors to the gallery have been allowed to leave.”

Visitors reported on social media not being allowed in or out of the gallery while emergency services dealt with the incident.

BBC journalist Jonny Dymond, who was in the gallery at the time, said visitors were funnelled into a main hall while all exits were closed.

He added: “There were quite a lot of families with children, and security guards told us we couldn’t leave.

“There was at least two fire engines, 10 police cars and an incident control unit.

“Parts of the exterior of the building were taped off.”

A London Ambulance service spokesman said that after they were called at 2:40pm two ambulance crews were sent to the scene, along with the Hazardous Area Response Team and the air ambulance.

“We treated a person at the scene and took them to hospital as a priority,” the spokesman added.

A sign placed outside the gallery confirmed that it would be closed for the rest of Sunday.– PA