Evacuation orders for some 188,000 residents remain in effect indefinitely

Residents below the tallest dam in the United States near Oroville in Northern California were ordered to evacuate immediately after authorities said an auxiliary spillway was in danger of imminent collapse. Video: California DWR 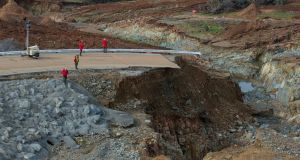 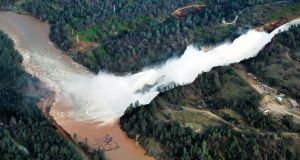 Water continues to run down the main spillway at Lake Oroville on Monday. Photograph: Randy Pench/AP

Stormwaters receded on Monday behind the nation’s tallest dam, in Northern California, as engineers raced to drain the rain-swollen reservoir and shore up a crumbling overflow channel before new storms sweep the region this week.

Authorities said they had averted the immediate danger of a catastrophic failure - one capable of unleashing a wall of water three stories tall on towns below.

But evacuation orders for some 188,000 residents remained in effect indefinitely, Butte County sheriff Kory Honea said at a midday news conference. The risk to those living in the Feather River valley below the Lake Oroville Dam, 105km (65 miles) north of Sacramento, was still being reviewed, he said.

“We need to have time to make sure that before we allow people back into those areas it is safe to do so,” Mr Honea said.

Residents below the dam were ordered from their homes on Sunday when an emergency spillway that acts as an automatic overflow channel appeared on the brink of collapse from severe erosion during what is on track to be Northern California’s wettest winter on record after years of drought.

Environmental groups had warned for more than a decade that the dam’s spillway was not safe.

“Infrastructure is profoundly important, and in our complex society, whether it’s electricity or gas or water or roads or bridges, there’s a lot to be done,” California governor Jerry Brown told reporters during a news conference on Monday evening.

Mr Brown on Monday sent a letter to US president Donald Trump requesting he issue an emergency declaration, which would open up federal assistance for the affected communities.

Mr Brown said he was pleased by Mr Trump’s promise to pursue a $1 trillion infrastructure program, adding, “I’ll strive to make sure California gets 12 per cent” referring to the state’s share of the US population.

Residents were stunned by the ferocity of the waters.

Alfred Ybarra had gone down to the Feather River with his children on Sunday to take photographs, and they quickly found themselves in trouble.

“Within minutes the water was up to the tires on my car,” Mr Ybarra said. “I told my kids, ‘You have to pray. It’s the only thing that you can do’.”

The main spillway, a separate channel, is also damaged because part of its concrete lining fell apart last week. Both spillways are to the side of the dam itself, which has not been compromised, engineers said.

The situation grew less dire later on Sunday as water levels dropped, leaving the weakened unpaved emergency spillway largely intact. By Monday, the level of the lake fell enough so that water was no longer pouring over the hill.

Erosion caused by the hole in the side of the main spillway appeared to have abated by Monday, and it was back to more or less normal operations, officials said.

The aim is to lower the reservoir’s overall water level by 50 feet - and prevent further spillover down the emergency hillside channel - before more rain arrives in the coming days and snow-melt runoff begins in the spring, acting state water resources director Bill Croyle told reporters. He said he hoped to achieve that goal within two weeks.

Another storm was forecast to arrive as early as Wednesday or Thursday, though officials said they expected much of that precipitation to fall as snow rather than rain.

On Monday afternoon, crews began dropping large bags filled with rocks into a gap at the top of the emergency spillway in a bid to rebuild the eroded hillside.

Meanwhile, water could be seen gushing from the main concrete spillway as dam operators for the California Department of Water Resources continued controlled releases through the paved chute into channels that route the water away from populated areas.

The dam’s hydropower release valves also have been shut down to prevent damage from sediment and debris carried by heavy rain.

Butte County and environmental groups have fought against a re-licensing of the dam for more than a decade, legal documents show.

Conservation groups Friends of the River and the Sierra Club argued in 2005 that the dam’s emergency spillway should be better fortified and risked severe erosion when water levels rose.

The Federal Emergency Regulatory Commission, which licenses the dam, denied this, stating in a 2006 memo that “in the rare event of a discharge, the emergency spillway would perform as designed.”

Butte County, meanwhile, argued that it had been left to police the dam without help from the state to offset costs.