Russia says Michael Flynn resignation a ‘matter for US’

Donald Trump's national security adviser, Michael Flynn, resigns after coming under fire over whether he discussed the possibility of lifting US sanctions on Russia before Trump took office. Video: Reuters 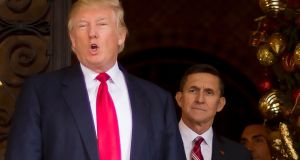 “We’ve said everything we want to say,” Mr Peskov told reporters on a conference call.

Mr Flynn resigned late on Monday after revelations he had discussed US sanctions on Russia with the Russian ambassador to the United States before Mr Trump took office and misled vice-president Mike Pence about the conversations.

Mr Peskov has previously said Flynn and the ambassador did not discuss lifting sanctions in their conversations. He declined to elaborate on those earlier comments when asked on Tuesday.

The United States imposed sanctions on Russia over its 2014 annexation of Ukraine’s Crimea and the activities of pro-Russian separatists in eastern Ukraine. The Kremlin denies supplying weapons and troops to the separatists.

A senior administration official said he was one of three candidates the president was considering to replace Mr Flynn on a permanent basis.

He had previously been appointed the National Security Council chief of staff and, along with Mr Flynn, advised Mr Trump on national security and foreign policy issues during the campaign. He had been considered for national security adviser before the post went to Mr Flynn.

He was chief operating officer of the Coalition Provisional Authority in Iraq, the interim governing body following the fall of Saddam Hussein in 2003. He was previously executive vice-president of research and technology for Virginia-based information technology firm CACI International, which works as a contractor for defence, intelligence and homeland security agencies.

The most audacious choice would be former CIA director David Petreaus. The retired four star general was forced from his position at the intelligence agency in 2012 after he it was revealed that he passed on classified information to his biographer, who had also become his mistress.

Robert Harward, a Navy Seal, served as deputy commander of the United States Central Command when it was under the command of general James Mattis, who is now defence secretary. The retired vice admiral served on the National Security Council for President George W Bush and commissioned the National Counter Terrorism Centre.

In 2013 when he retired after a nearly 40-year career in the Navy, he took a post as a chief executive officer for defence and aerospace giant Lockheed Martin in the United Arab Emirates. Mr Trump has recently been in very public negotiations with Lockheed over the cost of its F-35 fighter jet programme.