Residents below the tallest dam in the United States near Oroville in Northern California were ordered to evacuate immediately after authorities said an auxiliary spillway was in danger of imminent collapse. Video: California DWR 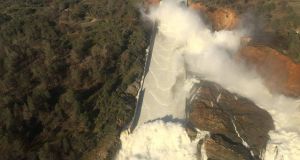 A damaged spillway with eroded hillside (right) is seen in an aerial photo taken over the Oroville Dam in Oroville, California, US on Sunday. Photograph: Reuters 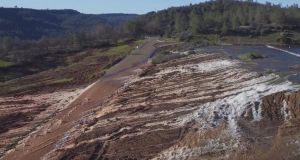 An undated handout photo made available by the California Department of Water Resources (DWR) showing an aerial view of the damaged Oroville spillway. Photograph: EPA 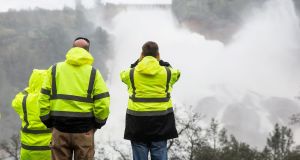 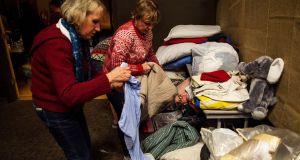 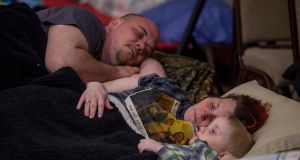 Evacuees Jason and his wife Elizabeth Bourquin settle in for the night with their son Dallas (5) at a church in Chico, California. Photograph: Peter Da Silva/EPA 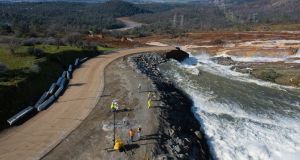 Water from the Oroville Dam Auxiliary Spillway at Lake Oroville eroding the roadway just below the spillway that leads to the spillway boat ramp, in Oroville, California. Photograph: Kelly M Grow/EPA

Nearly 200,000 people living downstream from the tallest dam in the US were ordered to evacuate their homes on Sunday because an overflow channel appeared fto be in danger of imminent collapse.

The abrupt evacuation order was issued mid-afternoon, as authorities determined that the auxiliary spillway on the Lake Oroville dam in northern California could give way, potentially unleashing a wall of water on to rural communities along the Feather river.

“Immediate evacuation from the low levels of Oroville and areas downstream is ordered,” the Butte County sheriff said in a statement on Facebook. “This is not a drill.”

The California department of water resources said the overflow channel was “predicted to fail within the next hour”.

Several hours later the threat had receded and the overflow channel remained intact, though the evacuation order was still in place.

The water resources department said helicopters would drop rocks to fill a gap in the channel. Authorities were also releasing water to lower the lake’s level.

An emergency evacuation of the City of Marysville and Yuba County has been issued.

By 10pm, state and local officials said those efforts had paid off and, with water no longer flowing over the eroded channel, the immediate danger had passed. But they cautioned that the situation remained unpredictable.

“Once you have damage to a structure like that it’s catastrophic,” Bill Croyle, acting director of the water resources department, told a press conference.

The dam, whose structure remains sound, is nearly full following a wave of winter storms that brought relief to the state after four years of devastating drought. Water levels were less than 2m (7ft) from the top of the dam on Friday.

Butte County sheriff Kory Honea said he was told by experts earlier on Sunday that the hole being created in the channel could compromise the structure. Rather than risk thousands of lives, Honea said, a decision was made to order the evacuations.

Evacuation orders remained in place for 188,000 people in Oroville, Yuba County, Butte County, Marysville and nearby communities. The Yuba County office of emergency services urged evacuees to travel only to the east, south or west. “Do not travel north toward Oroville,” the department said on Twitter.

Evacuation centres were set up in Chico, California, about 32km (20 miles) northwest of Oroville, but major highways leading south out of the area were jammed as residents fled the flood zone.

California governor Jerry Brown issued an emergency order that he said would bolster the state’s response. “I’ve been in close contact with emergency personnel managing the situation in Oroville throughout the weekend and it’s clear the circumstances are complex and rapidly changing,” he said.

Mr Brown asked the Federal Emergency Management Agency on Friday to declare the area a major disaster due to flooding and mudslides brought on by recent storms.

This is the first time in the dam’s history that water has flowed above the overflow channel. The structure is expected to face further strain in the coming months as northern California faces its wettest ever winter.