Emmanuel Macron and the French politics of ambiguity 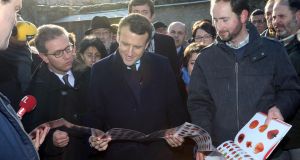 Emmanuel Macron, the 39-year-old former economy minister, presidential adviser and Rothschild banker, is meant to be the providential man who will slay the dragon of the extreme right, rejuvenate France and save Europe.

Polls indicate Macron, an independent candidate who launched his “En marche!” movement only 10 months ago, will finish second in the first round of France’s presidential election in April. But they suggest he will defeat Marine Le Pen, the leader of the extreme right-wing Front National (FN), thus becoming France’s next president, in the May 7th run-off.

Macron has a problem, however. He has postponed his long-awaited presidential programme, and French media of all stripes are hammering away at his “vagueness”.

Macron has now promised to provide figures for expected growth, and projected savings and spending, on February 22nd. That is to be followed by some dozen provisions of his “contract with the nation” on March 2nd.

In the meantime, Macron hopes to hold the country’s attention. He attracts support from left, right and centre and has been called the “unidentified flying object” of the presidential campaign. The sociologist Michel Wieviorka says Macron represents “the extreme centre”.

Macron seems to have adopted the maxim of the 17th-century Cardinal de Retz: “One abandons ambiguity at one’s peril.” Critics say he’s a “marketing product” who hopes to be elected on image alone.

The public knows what the other candidates stand for. FN supporters are not clamouring for Marine Le Pen to provide costings for her 144 propositions. Francois Fillon, the conservative Les Républicains (LR) candidate who is in third place, became evasive about his plans to cut French social security when they raised an outcry.

The socialist candidate Benoit Hamon made the universal basic income his signature policy. And far-left candidate Jean-Luc Mélenchon has borrowed the term “dégagisme” – roughly translated “get lostism” from the “jasmine revolution” that overthrew the Tunisian dictator Ben Ali. 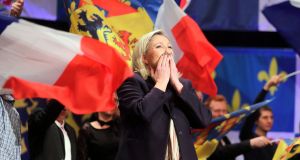 One of Macron’s best ideas is actually a form of dégagisme. To renew the political class, he has promised that no more than half of 577 “En marche!” candidates for the June legislative elections will be professional politicians.

Macron’s speech in Lyon on February 4th was meant to be the opening “gong” of his campaign, but it fanned accusations that he talks in platitudes. “Your presence, this wall of presences around me, is living proof that we are all here,” he began his speech.

Macron’s distaste for Brexit and Donald Trump contrasts starkly with Le Pen’s enthusiasm for both. He lamented the “temptation of withdrawal” manifest in the Brexit vote and “the withdrawal . . . of our American friends who are perhaps abandoning their historic mission of ensuring peace in the world at our sides”.

In one of his more daring propositions, Macron offered asylum to US researchers, academics and businesses “who are fighting against obscurantism, and all those who, these last few days, have expressed fear for research on climate change, endocrine disruptors, pollution, renewable energy . . .”

A Macron rally is doubtless the only place in France where supporters chant “Europe! Europe!”

At one point, Macron seemed to address French dissatisfaction with the EU, saying, “We cannot praise the European project without at the same time proposing another vision of Europe.”

One waited breathlessly for that new vision of Europe, but it never came. A few minutes later, Macron promised total fidelity to Europe “because Europe was created for peace, for prosperity and for progress”.

Macron agrees with Le Pen on raising the defence budget, recruiting more police and gendarmes, and ensuring that “our forces of order, the authority of the state” are respected.

Without ever pronouncing the words “Muslim” or “Islam,” Macron said he “does not accept that a man refuses to shake a woman’s hand because of religion”. Nor would he accept “that the look in men’s eyes prevent women sitting down in a cafe”.

In typical on-the-one-hand-on-the-other-hand Macron fashion, the candidate drew the line at denying a woman the right to wear a headscarf – unless she works for the government – because “those are not the rules of the Republic”.

The greatest danger for Macron is that he will come to be seen as the heir of his former mentor, the deeply unpopular president François Hollande, since most of the measures he hints at are the continuation of Hollande’s policies.

Macron’s intention to reform France’s extremely costly unemployment regime, which has made it virtually impossible to fight joblessness, is a notable exception. He wants to extend (doubtless dramatically lower) unemployment benefits to everyone, including those who resign and the self-employed.

But this newfound “security” would be counter-balanced by unprecedented “flexibility”. He would make it easier to hire and fire, and the jobless would lose benefits if they refused “a reasonable offer”. Macron’s vision of labour reform is much braver than last year’s El Khomri law, which was designed to create a more flexible labour market and sparked months of often violent protest.

Trailblazing journalist Harold Evans dies aged 92 09:03
Trump refuses to commit to peaceful transfer of power if he loses election 07:44
US officer involved in Breonna Taylor killing charged with wanton endangerment 01:04
Refugees experience ‘catalogue of cruelty’ when intercepted and returned to Libya 00:01
No-deal Brexit’s economic cost for UK ‘could be three times worse than that of Covid’ 20:27