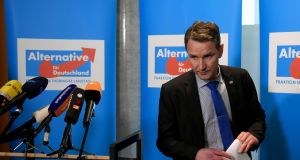 Björn Höcke, head of the far-right AfD party in the eastern state of Thuringia, who faces expulsion from the party after calling for a “180-degree shift” in how Germany remembered its past. Photograph: Hendrik Schmidt/AFP/Getty

Leaders of Germany’s far-right populist Alternative für Deutschland (AfD) party are wrangling over a decision to dismiss a provocative and divisive regional figure.

On Monday a two-thirds majority of the AfD board agreed to start expulsion proceedings against Björn Höcke, head of the party in the eastern state of Thuringia, after he dismissed as “silly” Germany’s ongoing process of coming to terms with its fascist past.

Mr Höcke told a cheering crowd of young AfD members in Dresden last month that this reflected Germans’ “emotional state as a brutally conquered people”, which continued to burden younger generations with a sense of guilt instead of achievement.

The call from Mr Höcke for a “180-degree shift” in how Germany remembered its past drew thunderous applause from the Dresden audience – and outrage when a video of the speech was posted online. After a telephone conference AfD coleader Frauke Petry said Mr Höcke should leave the party for “overstepping the limit of what is democratically tolerable”.

The Höcke scandal – and exclusion row – comes at a sensitive time for the AfD. It had hoped to use concerns over chancellor Angela Merkel’s refugee and security policies as a springboard into the Bundestag.

With an eye on September’s federal election, the party agreed last year a strategy paper cementing its “reputation as a breaker of taboos” and urging “careful planning” in the months ahead for further, targeted provocation. But Mr Höcke’s remarks, coinciding with a three-point slump in polls to 10 per cent,  suggest there are limits on provocation.

He has been a consistent AfD provocateur, warning of Africans’ “life-affirming expansionist” breeding that would eventually overwhelm the “self-negating European” culture.

Nationalist Höcke supporters, meanwhile, say dismissing him would undermine what the populist party views as a crusade against so-called political correctness. “The aim is apparently to greatly limit the diversity of opinion, which differentiates the AfD from other parties,” said the AfD parliamentary party in the Thuringian state parliament, headed by Mr Höcke.

The process of excluding Mr Höcke is a risky endeavour for high-flying co-leader Frauke Petry, who suggested asylum seekers could be shot for breaching Germany’s borders and defended another AfD regional politician who described Holocaust deniers as “dissidents”.

A year ago Mr Höcke, a 44-year-old teacher on leave, told The Irish Times he was actually a “remarkably introverted person”. In the German political system, he added, “provocation is essential” for a young party to attract attention and votes.