Donald Trump and Justin Trudeau meet for the first time 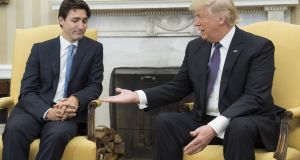 US president Donald Trump extends his hand to Canadian prime minister Justin Trudeau during a meeting in the Oval Office at the White House, in Washington, DC. Photograph: Kevin Dietsch-Pool/Getty Images

US president Donald Trump praised the “outstanding” trade relationship between the United States and Canada, saying he would only be “tweaking” it going forward.

The comments were received positively by Canadian prime minister Justin Trudeau, who came to the US seeking to ensure Canada was not crippled as Mr Trump re-negotiates the North American Free Trade Agreement (Nafta).

The neighbouring leaders took up the thorny subjects of trade and immigration at their first face-to-face meeting on Monday.

“We have a very outstanding trade relationship with Canada. We’ll be tweaking it,” Mr Trump told reporters.

“We’ll be doing certain things that are going to benefit both of our countries.”

At a joint news conference after their meetings, the two emphasised their shared goals.

Mr Trump pledged to work with Canada “in pursuit of our many shared interests”.

Mr Trudeau spoke of a special bond and the “deep abiding respect” between the two countries, though he also said that “relationships between neighbours are pretty complex”.

While Mr Trump and Mr Trudeau stressed shared interests, their contrasting views were also on display.

Responding to questions from reporters, Mr Trump defended his refugee and immigration orders, saying that “we cannot let the wrong people in”.

Mr Trump said his administration had “really done a great job” in its recent arrests of immigrants.

“We’re actually taking people that are criminals, very, very, hardened criminals, in some cases with a tremendous track record of abuse and problems.”

Mr Trudeau, on the other hand, said Canada continues to “pursue our policies of openness”.

Mr Trudeau later noted that there have been times when the two countries “have differed in our approaches”.

However, he said “the last thing Canadians expect is for me to come down and lecture another country on how they chose to govern themselves”.

Mr Trump greeted Mr Trudeau with a firm handshake as he arrived at the White House on a blustery morning.

The two posed silently before reporters, until Mr Trump suggested they shake hands for the cameras.

At the news conference, the two leaders also met with several female chief executives of companies from both countries to announce that Canada and the US would set up a cross-border council to advance women into executive roles, and to encourage entrepreneurship.

A top White House official sidestepped repeated chances on Sunday to publicly defend him. Mr Trump has yet to comment on Mr Flynn’s status.

Vice-president Mike Pence has also yet to comment. Mr Pence previously denied that Mr Flynn had discussed sanctions with Sergey Kislyak, the Russian ambassador to the US.

Mr Pence and Mr Flynn spoke twice on Friday, according to an official.

Mr Trump has told associates he is troubled by the situation, but he has not said whether he plans to ask Mr Flynn to step down, according to a source.

Mr Flynn was a loyal Trump supporter during the campaign, but he is viewed sceptically by some in the administration’s national security circles, in part because of his ties to Russia.

Stephen Miller, Mr Trump’s top policy adviser, skirted the issue on several Sunday news shows, saying it was not his place to weigh in on the “sensitive matter” or to say whether the president retains confidence in Mr Flynn.

Their silence appeared to reflect some uncertainty about the views of the president, who is known to quickly change his mind.

1 Donald Trump's taxes: US president paid $750 federal income tax the year he won the election
2 Hello Eir, is anybody there? Four unhappy customers complain
3 Covid-19: Possible extra restrictions for four counties to be decided by weekend
4 More than 30 people queue overnight to secure property in Carlow
5 Coronavirus cases rise in most counties but rate of increase is slowing
Real news has value SUBSCRIBE