Tens of thousands of people gathered on the National Mall in Washington on Friday to denounce racism and protest police brutality, as they marked the 57th anniversary of Martin Luther King’s famous march on the US capital. Video: Reuters 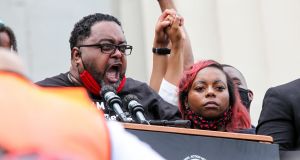 Jacob Blake snr, father of Jacob Blake, speaks to the crowd at the Lincoln Memorial during the Commitment March on Friday in Washington, DC. Photograph: Natasha Moustache/Getty Images

Attorneys for Jacob Blake said on Friday the 29-year-old black man who was shot seven times by a US police officer in Kenosha, Wisconsin last weekend was no longer shackled to his hospital bed.

Mr Blake’s father had revealed earlier that Mr Blake had spent the week shackled to his hospital bed despite being unable to walk and being heavily medicated.

“There was the cold steel on his ankle. He is shackled to the bed, but he cannot get up, he could not get up, he is paralysed,” Jacob Blake snr, father of Jacob Blake jnr, told CNN, describing a hospital visit with his son two days ago.

“He grabbed my hands and began to weep and he told me that he was having hallucinations. He said ‘Daddy, Daddy, I love you. Why did they shoot me so many times?’ I said, ‘Baby, they were not supposed to shoot you at all,’” Blake snr said.

He wept intermittently during the live interview on Friday morning.

“I lay on the bed close to him. We talked about him being paralysed from the waist down. He wanted a dog and I said, ‘We will get you a dog, baby.’”

Lawyers acting for the Blake family have said Jacob Blake has a damaged spinal cord, spine, stomach, kidneys and liver, has lost most of his colon and has no bowel or genital function.

Mr Blake said he did not know why his son was shackled, saying: “I guess he is in custody, I don’t know.”

The family’s lawyer, Ben Crump, said: “There is no explanation for this.”

Mr Blake snr’s comments came after the fifth night of protests in Kenosha, which were peaceful on Thursday night for the second night after a fatal shooting when agitators attacked protesters on Tuesday night.

Later on Friday it emerged that Mr Blake was apparently shackled to his hospital bed because of an outstanding arrest warrant on three domestic abuse-related charges, including one for trespassing and one for third-degree sexual assault.

The handcuffs were removed on Friday after his lawyer agreed to a court hearing on the matter and the warrant was vacated, one of his attorneys, Pat Cafferty, said.

Police officers who had been guarding the hospital room have also left, Mr Cafferty said.

Late on Tuesday, when agitators had confronted protesters,a 17-year-old gunman fatally shot two protesters and wounded another, police said. Before the killings, some who did not appear to be linked to the main, peaceful protest groups engaged in looting.

The Kenosha News reported that there were no incidents of fire or vandalism as of 10.30pm on Thursday.

At Civic Center Park, some protesters sang along to religious music. Black Lives Activists of Kenosha, a major protest group, walked with flags to the sprawling local law enforcement complex. Several calmly spoke with two police officers to discuss the release of at least one detained demonstrator, the newspaper said

On Friday, more details emerged about police involved in Mr Blake’s shooting. The Wisconsin department of justice, which previously named Rusten Sheskey as the officer who shot Mr Blake in the back, identified two more officers present during the encounter: Vincent Arenas and Brittany Meronek.

The officers allege that Mr Sheskey and Mr Arenas used their Taser stun guns on Mr Blake when their attempt “to stop” him during his arrest failed. Investigators said that Mr Sheskey was the only officer who fired a weapon and that Mr Blake had told the police he had a knife.

As the ranks of national guards members are poised to increase, law enforcement response to protests - which has included some use of teargas and flash-bangs - has come under scrutiny.

Activists have said that some demonstrators who were arrested in Kenosha this week were “snatched up” by federal law enforcement officers in unmarked vehicles, according to the Milwaukee Journal Sentinel. On Wednesday night, three area activists were arrested while walking to their vehicle, and then whisked away in an unmarked sports utility vehicle, organisers said.

Video on social media appears to show law enforcement agents smashing the windows of a minivan with Oregon license plates and forcibly removing the people inside. Those people were subsequently driven away in an SUV.

Police in Kenosha claimed that this group had been stopped after federal US Marshals spotted them allegedly filling gas cans at a gas station, reports said.

Authorities claim that they used force because the driver didn’t stop when ordered to do so. These arrestees were part of the group Riot Kitchen, a Seattle-based non-profit that gives food to homeless persons and protesters, the newspaper said.

A high-profile lawyer representing the 17-year-old boy charged with killing two protesters and wounding another during demonstrations on the streets of Kenosha, Wisconsin, said on Friday that his client had acted in self-defence. Atlanta-based attorney Lin Wood said video footage of the altercation would vindicate Kyle Rittenhouse despite what he described as misinformation being spread by the media. “Kyle Rittenhouse acted in self-defence. Murder charges are factually unsupportable. An egregious miscarriage of justice is occurring with respect to this 17-year old boy,” Wood said on Twitter. Mr Rittenhouse, who prosecutors say travelled 50 km (30 miles) to Kenosha from his home in Antioch, Illinois, before the shooting at about 11.45 pm on Tuesday, is charged with six criminal counts, including first-degree homicide and attempted homicide. Prosecutors accuse Mr Rittenhouse of firing an assault-style rifle at three protesters who tried to subdue him, killing 36-year-old Joseph Rosenbaum and Anthony Huber (26). The criminal complaint cites as evidence several videos recorded by witnesses, including one in which Mr Rittenhouse is seen calling a friend from the scene and telling them: “I just killed somebody.” An Illinois judge on Friday postponed his extradition to Wisconsin while the teenaged defendant arranged a private legal team. Mr Rittenhouse, a former YMCA lifeguard who is being held without bond, did not appear at the livestreamed hearing.–Guardian and Reuters