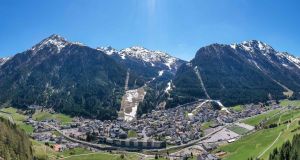 The village of Ischgl. Photograph: Johann Groder/EXPA/AFP via Getty

The families of three skiers who died after contracting Covid-19 at the Ischgl ski resort are to launch compensation cases against the Austrian state in September.

Their civil test suits in Vienna are running parallel to criminal cases brought against officials in the Tirol province and Ischgl, accused of prioritising their commercial interests over public health.

Eight days elapsed between the first warning from Iceland that returning holidaymakers had tested positive for the virus and Ischgl’s complete shutdown.

At least 6,000 skiers from 45 countries have contacted Austrian consumer protection lawyer Peter Kolba, believing they were infected in the Alpine village in February and early March.

Dr Kolba says more than 1,000 Ischgl visitors, from Ireland to Israel, have joined his criminal case. But, four months on, he says local prosecutors in Innsbrück have yet to interview anyone in Ischgl as part of their investigation, and are refusing him access to relevant files.

“We are trying to exhaust all legal means,” he said, “to raise the pressure on the Austrian government in the hope they will agree to a round-table process and spare those involved years of legal battles.”

Among those he is representing are three families who lost loved ones from Covid-19 after a visit to Ischgl: two German men, aged 52 and 54, and a 74-year-old Austrian journalist.

“All three were healthy. The 74-year-old contracted the virus, we believe, after he was pushed into a packed bus to take visitors to the station,” said Dr Kolba. What he calls the “chaotic departure” of guests from March 13th will be a key part of the case.

Ski lifts will operate at regular capacity, though passengers will be required to wear masks and the cabins will be disinfected with a special device.

“It would be smart for us if we try to get our guests as quickly as possibly on to the mountain so they can spread out,” said Erich Egger, head of the Salzburg chamber of commerce.

Other measures include testing all local service staff at the start of and during the season. Visitors will be encouraged to present a negative test result on arrival, or take a free test after check-in.

Après-ski parties – a major economic factor in Ischgl, and the likely source of most infections in March – will go ahead with some minor changes.

All bars and restaurants will be obliged to close for 30 minutes from 6.30pm to allow for airing and disinfecting.

“A controlled après-ski is certainly better than parties in the lanes,” said Franz Hörl, spokesman for the ski-lift operator.