Maureen Dowd: Efforts to cast Harris as an angry woman will not succeed

The US is rapidly moving past such caricatures. Besides, women should be angry 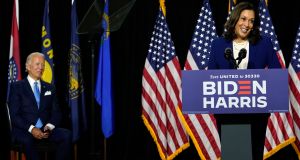 One wintry day in 1992, my boss drolly told me to try to look young. We were meeting Richard Nixon, and the fallen president preferred to talk to reporters who were not old enough to have covered his Waterloo of Watergate.

We had our coffee with him two years before he died. Some of his observations on the presidential race were smart but one seemed more vengeful than visionary.

He warned that Bill Clinton’s campaign would have to be careful about how it deployed Hillary. “If the wife comes through as being too strong and too intelligent, it makes the husband look like a wimp,’’ he said, adding that unfortunately some voters concurred with Cardinal Richelieu’s pronouncement, “Intellect in a woman is unbecoming.”

I wondered if he was still smarting that Hillary Rodham had been a lawyer for the House Judiciary Committee’s impeachment inquiry. And I didn’t agree with him. Arkansas voters had a period of adjustment with their governor’s formidable wife. But on the national stage, it was Bill Clinton’s inability to control his appetites that made him seem weak – not having a strong partner.

“She is a very ambitious person,’’ Bennett told Bret Baier, about how the California senator might overshadow Biden. “She’ll be out there doing tons of interviews. Where will Joe be? Will he still be in the basement? There could be some problems here that arise.”

All those old tropes about castrating women are threadbare as Trump’s despicable attempt to recycle the birther smear he used to slime Barack Obama, this time against Harris, the daughter of a Jamaican father and Indian mother. She was born in Oakland, California.

Biden looks confident for choosing an accomplished woman who delivered a haymaker in a debate. After Donald Trump’s petty vindictiveness, Biden rising above grudges is a lovely thing to behold.

Even as Fox hacks lambasted Harris as “transactional”, Michael Cohen dropped an excerpt from his tell-all describing life with Trump as a mob movie: “I bore witness to the real man, in strip clubs, shady business meetings, and in the unguarded moments when he revealed who he really was: a cheat, a liar, a fraud, a bully, a racist, a predator, a con man.”

In his nefarious attempt to suppress the vote, Trump is ruining that great American achievement, the US Postal Service. He’s complimenting Marjorie Taylor Greene, the winner of a Republican primary in Georgia who openly flirts with the insane QAnon cult and says she’s going to Washington to get rid of that “bitch”, Nancy Pelosi. (Let us know how that goes.) And, inexplicably, the president is talking about undermining Social Security, not only touching the third rail of politics but picking it up and putting it in his mouth.

Yet our mad king has the gall to dismiss Harris as “sort of a madwoman”.

Trump’s hardcore base of white misogynists and his yammering sewing circle of Bill Barr, Rudy Giuliani, Sean Hannity and Tucker Carlson will eat it up.

“Is America ready for a shallow, hectoring, rich lady whose only real fans work at hedge funds and MSNBC?” Carlson said, hectoring.

Harris has shown that she can throw a few elbows, that she doesn’t worry about always being nice, and I like that about her. The effort to cast her as an Angry Woman will not succeed; the country is rapidly moving past such caricatures. Besides, women should be angry. Trump’s feckless response to coronavirus has forced parents to play Russian roulette with their kids and schools.

It’s rich that the campaign of the phony in the Oval called Biden’s running mate “Phony Kamala”. If Team Trump wants to depict her as calculating, bring it on.

After all the Trump flailing, some calculating would be welcome. We need the daughter of a scientist – as a little girl, she washed her mother’s test tubes at the research lab – to calculate the best way to get us out of virus Groundhog Day, once the president who fought masks and who bungled testing is dispatched. We need someone who worked in law enforcement to calculate the best way to reimagine policing without decimating it.

The charismatic senator bristles at being called “the female Obama”. Valerie Jarrett, Hilary Rosen and other feminists have sent out a memo instructing the media not to talk about the appearance of a woman running on the ticket. Don’t call her glamorous! Still, I have to say, the senator has that same magnetic smile that Obama had, back in the days before Mitch McConnell wore him down, a smile that fills you with hope about what the US can be.

After Biden teamed up with Obama, he said privately he knew he was unlikely to succeed the president because his party would want to make history with the first woman in the White House after the first black president. Biden would have to settle for being the bridge linking the past – experience and establishment ties – to a future with the exciting political newcomer.

But fate, which has often been cruel to Biden, has provided a stunning, soaring twist to the story. After being condescended to by Obama whippersnappers and Hillaryworld, and pushed out of contention for the 2016 race by Obama, Biden was brought back to life in 2020, at age 77, by Jim Clyburn and black voters in South Carolina.

And now he will be the nominee he thought he could never be, as well as the bridge for another younger, biracial, razzle-dazzle partner with an uncommon first name. This time, it’s a woman from the west with a “Modern Family” home life. Biden could be paving the way for the first woman to be president, one who writes with pride about her black and south Asian roots. (A bit of expiation for Anita Hill.)

If that happens, Donald Trump will deserve some credit, too, for mobilising female voters to fight against his porcine, backward, dangerous behaviour and inspiring Democrats to push for a woman, especially a woman of colour, to get the golden ticket. Trump tweeted on Friday that he wants to build a “BEAUTIFUL STATUE” here in honour of the centennial of women getting the right to vote. But being the catalyst to elect the first female vice-president would be the best way to celebrate. – New York Times