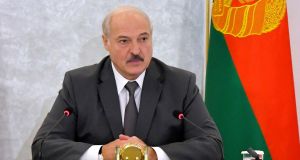 Belarusian president Alexander Lukashenko has ordered police to quash opposition protests, in defiance of European Union calls for national dialogue to end a crisis that could cripple the country and put the West and Russia at odds again.

The EU on Wednesday rejected Mr Lukashenko’s re-election in a disputed August 9th ballot and backed sanctions against Belarusian officials who were involved in vote fraud and a crackdown on protests in which at least three people died, hundreds were hurt and some 7,000 detained.

In an emergency video conference, EU leaders said they supported Belarusians’ right to peaceful protest and insisted the country’s people rather than the EU or neighbouring Russia should shape its future.

Riot police were back on the streets of Minsk and other Belarusian cities however, as the autocratic Mr Lukashenko issued tough new orders to police and military chiefs as he weathers the biggest crisis of his 26 years in power.

“There should be no more unrest in Minsk. People are tired, people demand peace and quiet,” he told the interior ministry, as police dispersed striking workers and protesters outside the city’s factories and elsewhere.

He told his KGB security service to “work to the maximum” to halt the organisation and funding of protests that he claims are controlled from abroad, and ordered border forces to “not allow militants, weapons, ammunition, or money for financing unrest to enter Belarus from other countries”.

As the threat to his regime has grown, Mr Lukashenko has claimed without citing evidence that Belarus faces a military threat from EU and Nato neighbours Poland and Lithuania, and claimed inaccurately that his opponents want to downgrade ties with Russia.

At the same time, he has received assurances from the Kremlin that it will help protect Belarus from any external threat; concerns over Moscow’s intentions grew when an official plane often used by the chief of Russia’s FSB security services flew to Minsk on Tuesday night and returned a few hours later.

“The future in Belarus has to be decided by the people in Belarus, not in Brussels or Moscow,” said European Council president Charles Michel, a day after Russian president Vladimir Putin told EU leaders he would not accept “meddling” in Belarus.

“This is a national crisis . . . We want to avoid external negative interferences,” Mr Michel added, amid fears that Belarus could become a new flashpoint in relations with Russia, six years after it occupied Crimea following a pro-western revolution in Ukraine.

European Commission president Ursula von der Leyen praised the “courage” of protesters after elections that were “neither fair nor free”, and said the bloc was “ready to accompany the peaceful democratic transition of power in Belarus”.

German chancellor Angela Merkel revealed that Minsk was not answering her calls. “I don’t see a role for myself as a mediator at the moment since Lukashenko refused to talk to me, which I regret,” she said.

“But now there’s no such need,” he said.

“The most important thing in the current situation is that there should be no influence from outside, no meddling,” Mr Peskov added. “Unfortunately, we do note that attempts to exert direct pressure are taking place.”

Opposition leader Svetlana Tikhanovskaya, who fled to Lithuania last week, urged the EU to support the “awakening” of Belarus. She claims to be the rightful winner of an election that was officially won by Mr Lukashenko with an implausible 80 per cent of votes.