Biden on brink of passing historic $1.9tn boost to US economy 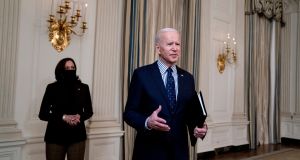 Joe Biden is on the brink of securing final approval from Congress for his $1.9 trillion (€1.6 trillion) stimulus bill – a bet that massive fiscal intervention aimed at lower and middle class families will speed up America’s recovery without overheating the economy.

After the US Senate voted to approve the package on Saturday, the Democrat-controlled House of Representatives is poised to give its final green light to the bill on Tuesday, allowing it to be signed into law by Mr Biden.

Barring any last-minute trouble in the House, where Democrats hold a slim majority, the stimulus legislation will mark a big political victory for Mr Biden, who made it his top priority since entering the White House on January 20th.

The stimulus bill – known as the American Rescue Plan – represents one of the largest US government interventions in the economy of the post-second World War era – just short of the size of the $2.2 trillion March 2020 pandemic stimulus, but larger than the $787 billion recovery plan during the 2009 financial crisis.

The prospects for its passage have already led many private-sector economists to upgrade their forecasts for US growth this year. Federal Reserve officials are likely to do the same when they publish their latest economic projections next week.

But the plan has attracted criticism from Republican lawmakers – who have so far unanimously opposed the plan – as well as some economists, including Lawrence Summers, the treasury secretary under Bill Clinton, who say it risks a harmful spike in inflation.

A recent sell-off in long-term government debt has fuelled those concerns, though senior US policymakers including Janet Yellen, the treasury secretary, and Jay Powell, the Federal Reserve chair, have dismissed the worries.

Around the world, the US stimulus package could give a fresh jolt to the global recovery amid hopes that widespread vaccinations throughout the year will help reopen many economies. But any unintended jump in US inflation or debt yields could unsettle markets and prove particularly harmful for emerging markets.

Domestically, Mr Biden’s top aides and many Democrats on Sunday touted the plan as “historic and transformational” legislation for families that have struggled through the pandemic. The bill – which will be financed entirely by adding to the US deficit – will dispatch $1,400 means-tested payments to most Americans; extend emergency federal jobless benefits worth $300 per week until September; increase a tax credit for children; provide aid to states and local governments; and boost funding for schools and vaccinations.

“This is a bill that reflects President Biden’s belief that the best way to get the economy back on track and get it growing is to invest in working people and middle class people,” Kate Bedingfield, the White House communications director, told CNN.

“It is urgent aid that is going to help people all across the country but it’s also making a long-term investment,” she added.

The US president had applauded passage of the Senate’s version in remarks on Saturday, following an all-night session in the upper chamber of Congress.

Mr Biden was on Sunday expected to sign an executive order to boost voting rights, at an event commemorating the civil rights protesters who were tear-gassed and beaten by state troopers in Selma, Alabama 56 years ago.

Senate passage of the stimulus legislation – by a party-line 50 to 49 vote – was held up for hours as Democratic leaders sought to get the decisive consent of Joe Manchin, the moderate West Virginia Democrat, who was insisting on tighter terms for the jobless benefits.

On Sunday, Mr Manchin did the rounds of US television networks to trumpet his role in the talks, rejecting any fears that the Biden plan was excessive.

“I can assure you, we have helped every segment of society right now, more so than ever before with this piece of targeted legislation,” he told Fox News Sunday.