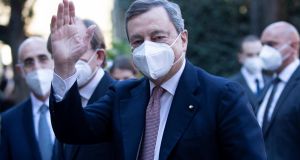 Italy’s prime minister Mario Draghi has set out to reboot the country’s vaccination programme which is run, with varying degrees of success, by regional governments. Photograph: Massimo Percossi/EPA/ANSA

It did not take Mario Draghi long to make a mark in Europe as Italian prime minister.

At his first EU summit as premier at the end of last month, the former head of the European Central Bank made a forceful intervention about the slow pace of Europe’s vaccination drive and the need to get tough with pharmaceutical companies over their failure to deliver promised vaccine supplies.

Seven days later, the Italian government confirmed that, with Brussels’s approval, it had blocked a consignment of doses of the Oxford/AstraZeneca vaccine destined for Australia under an EU-wide export authorisation scheme that has been criticised by other countries. The company has fallen far short of its promised deliveries to the EU in the first three months of 2021.

Draghi, a man who earned impeccable internationalist credentials as ECB president, became the first leader to trigger an EU mechanism that critics see as vaccine nationalism that risks undermining the global fight against the pandemic.

“Imagine what would have happened if [former prime minister Giuseppe] Conte or [Matteo] Salvini had taken such a stance,” said an official with the Democratic Party, part of the governing coalition.

Salvini, leader of the nationalist League which is also in the coalition, wrote on Twitter that he was “proud Italy was the first European country to block exports outside the EU”.

Draghi was installed as prime minister last month to break Italy’s political paralysis and revamp plans to spend up to €200 billion in EU funds to support an economic recovery and faster long-term growth. But an alarming resurgence of infections in recent weeks means fighting the pandemic is his overriding priority.

His robust stance on export controls was an expression of “strong restlessness” about the EU’s handling of the vaccination campaign, said Giovanni Orsina, director of the Luiss school of government in Rome.

“The current situation shows a strong fragility in Brussels’s negotiating position towards the big pharmaceutical companies,” Orsina added. “Draghi is using his political clout to redress the balance in this regard, clearly also in Italy’s favour. Absurdly, having a person of extraordinary international prestige allows for a much stronger approach to national protection than a pure sovereigntist as prime minister.”

At the EU summit Draghi asked why the bloc had not imposed stricter vaccine export controls for companies that failed to meet their contractual commitments. Speaking to Ursula von der Leyen, European Commission president, by phone this week, he stressed “the priority goal of a more rapid European health response to Covid-19, especially on vaccines”, according to his office.

Meanwhile, he has set out to reboot Italy’s vaccination programme which is run, with varying degrees of success, by regional governments. As of March 5th, Italy had administered only 5.2 million doses, or 8.6 per 100 people, below the EU average. More ambitious vaccination targets are expected within days.

Draghi has also replaced the coronavirus commissioner with an army logistics general who has experience in Afghanistan and Kosovo and who will work alongside a new head of the civil protection agency. The aim is to speed up vaccination across the country. The government is also weighing up whether to extend the interval between doses in order to increase coverage, as in the UK.

Drive-through testing centres and other sites are being converted into vaccination facilities, and a €500 million investment in a new manufacturing plant is planned.

“The Italian pharmaceutical industry is a sector to be proud of, and it is capable of ensuring the production of vaccines at all stages,” Giancarlo Giorgetti, economic development minister and League politician, said this week.

The Democratic Party official said replacing the Covid commissioner with a general was “concerning”, but Draghi’s efforts had otherwise drawn broad support.

Raffaele Trano, a former Five Star Movement MP now in opposition, said: “The muscular approach and the logistical revolution seem to be paying off, even against the big pharmaceutical companies who are not being reliable at all and whose priority is clearly to put profit before the health of citizens.”

“There is a need to act promptly, and Draghi is doing what he was called to do: speeding up the process as much as possible,” said Paola Boldrini, a centre-left member of the senate who sits on its health committee.

“Europe has acted as best it could, but Italy is in an emergency situation, which is the reason why the current government was formed,” Boldrini added. “Unfortunately, despite the great co-ordination in disbursing recovery funds, with vaccines the EU was not as efficient, the contracts that were signed [with pharmaceutical companies] underestimated the real production capacity of vaccines and Brussels found itself unprepared.”

Italian officials stress that the decision to block the vaccine consignment from Catalent, a Lazio-based fill-and-finish contractor, was taken jointly with the commission in accordance with the export transparency mechanism introduced in January.

“I would not interpret Draghi’s move, co-ordinated with the commission, through the lens of vaccine nationalism but rather of the EU’s willingness and ability to stand up to big pharma to protect its citizens,” said Nathalie Tocci, director of the Institute for International Affairs in Rome. The doses were intended for Australia, a country with few new infections and where the vaccination programme is still in its early stages.

“I don’t think that Italy would have taken this initiative if the country in question was either a developing country or one living through an emergency to the same extent EU member states are.”

“Recently the intra-EU controversy has been between institutions and big pharma, where the accusation is that the EU has not been able to stand up to companies, thus gambling on the lives of citizens,” Tocci added. “Seen through this lens, Draghi’s move, far from being an act of nationalism, could be read as the necessary step to prevent reigniting dangerous Euroscepticism.” – Copyright The Financial Times Limited 2021

3 People who refuse AstraZeneca vaccine will go to back of queue, says Varadkar