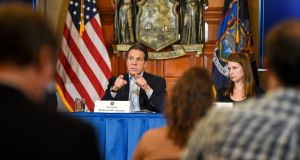 First, he married a Kennedy. Then he behaved like one. Like his idol Bill Clinton – he still cherishes the cigar humidor Clinton gave him – governor Andrew Cuomo did not seem to realise times had changed.

Back in 1998, when the story broke about the affair with Monica Lewinsky, Clinton aides whined to reporters that they should read biographies of President Kennedy. JFK did stuff like that all the time, they said. So did FDR! Yes, reporters explained, but that was then.

Clinton thought he could survive the scandal by hiding behind his circle of accomplished women, who filed before the cameras to repeat the president’s cowardly denials about “that woman”. He believed that his progressive actions for women would be a shield against his retrogressive behaviour.

It was a form of blackmail: Let me be a lech in the backroom and I’ll give you feminist policies in the Cabinet Room. As I wrote about Clinton, and I’ll say again about Cuomo, the power differential between a young aide or intern and a much older boss always makes things dicey. Throw in the fact that it’s a president or governor we’re talking about, and it’s most certainly an abuse of power.

In an ideal world, women would channel Barbara Stanwyck and snappily put the boss in his place. But this is a world where women had to stifle their inner blech for centuries for economic security. When your boss transgresses, your response could very well determine whether you keep your job, get the best assignments, or pay next month’s rent.

Charlotte Bennett (25), a former aide to Cuomo who has accused him of inappropriate conversation – asking whether she had trouble with intimacy after surviving sexual assault, saying how lonely he was during Covid and how he would date women over 22 – said she thought he was hitting on her.

“People put the onus on the woman to shut that conversation down,’’ she told Norah O’Donnell, “and by answering, I was somehow engaging in that and enabling it when, in fact, I was just terrified. It didn’t feel like I had a choice. He’s everyone’s boss.”

Now, some Democrats are feeling regret over forcing out Al Franken, and for all those statements by prominent Democrats about how we must start with the presumption that women are telling the truth – an absurd standard. They must be heard, but not automatically believed. (Although Cuomo has apologised for making “people feel uncomfortable.”)

In the first flush of #MeToo, Matt Damon was ripped to shreds for even suggesting that there could be gradations of transgressive behaviour. But not everyone is Harvey Weinstein.

Republicans simply deny it and hoist harassers to victory. Donald Trump’s assaults and antediluvian behaviour toward women? No problem.

Many older Democrats have what one calls “virtue exhaustion”. (Several women, bearing harassment battle scars themselves, privately dismissed Cuomo’s accusers to me as “snowflakes”.) Facebook and Twitter echoed with fears of being “Frankened” again. Cuomo might be a jerk, many Democrats said, but at least he’s not a fascist.

“Probably enough Democrats feel it no longer makes sense to hold your own side to serious ethical standards if Republicans won’t, so it’s possible to tough out things like this,” Ron Brownstein, a senior editor of he Atlantic, told me. “I wouldn’t look at this as evidence that #MeToo is losing momentum; it’s more the sense that a red-blue cold war is gaining momentum. I think there’s less and less willingness to unilaterally punish your own side. Why take your own piece off the board if they won’t?”

A new Quinnipiac poll shows most New York voters do not think Cuomo should resign but they also do not want him to run again. Sales for his swaggering leadership book have tanked. Linda Stasi, a longtime New York tabloid columnist, defended him, tweeting: “With any #sexualharassment allegation, #Dems always want to destroy the man’s reputation, and #Republicans always want to destroy the woman’s. No gray areas allowed.”

“You don’t get things done in this tough-ass state without being a bully,” she posted on Medium. “Terrible but true. He is also a big flirt who loves pretty women, and never fails to compliment in ways that are now considered very wrong.” Awkward, she argued, but not a pig.

To show what a confused state we’re in, remember that a Democrat who had to defend himself for nuzzling women in rope lines and got hit with a sexual harassment complaint is now a president with broad approval among Democrats. Even Trey Gowdy on Fox News urged a standard that is not filtered through the prism of politics: “I want one playbook for both Republicans and Democrats.”

So why was Cuomo, a man who has been passionate about passing laws against sexual harassment, citing the future he wants for his three daughters, and who has pilloried the “repugnant” behaviour of fellow New York pols accused of sexual transgressions, so tone-deaf and reckless? (Bennett claims he skipped the sexual harassment training he mandated.)

Because despite being drenched in the lessons of #MeToo, a society does not change instantly. The reason Shakespeare is still the greatest playwright is humans have the same tragic flaws, century after century. Cuomo was nicknamed the “human bulldozer’’ for his arrogance and maniacal zeal in pushing people and obstacles out of his way.

He improved his reputation at the start of Covid because frightened New Yorkers craved elevated testosterone in a leader at that moment: not a bully like Trump who was downplaying the threat; one like Cuomo who would confront Covid head-on and engage in combat to wrestle medical equipment and vaccines for New York.

But his appealing act – the protective father-at-the-head-of the-dinner-table, both to his own daughters in quarantine and metaphorically to nurture all New Yorkers – turned out to be a ruse. He was preaching openness and honesty while fumbling and deceiving on nursing home deaths. And three young women – two of whom worked with him – have now described him as more predatory than patriarchal.

When he claimed obliviousness about how he was making these women feel, he excused himself by saying that, like his father before him, he has a kissy-huggy political style with men and women. I covered his father, Mario, the three-time governor of New York who gnawed at the idea of a presidential run. And I can tell you that the closest he came to making a move in his office was reaching for a book by Teilhard de Chardin to give me. I still have it. – New York Times