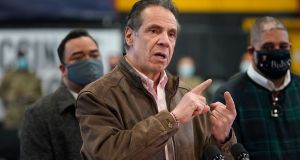 New York governor Andrew Cuomo says he has ‘never made advances toward Ms Bennett, nor did I ever intend to act in any way that was inappropriate’. Photograph: Seth Wenig/POOL/AFP via Getty Images

A second woman has come forward to accuse New York governor Andrew Cuomo of sexual harassment in a move that has prompted the under-fire Democrat to request an independent investigation into the allegations.

Charlotte Bennett, who was an executive assistant and health policy adviser in the Cuomo administration until November, told the New York Times that he had harassed her last spring, during the height of New York’s fight against coronavirus – which Mr Cuomo led and which at the time gave him an international reputation for good leadership.

Ms Bennett told the paper Mr Cuomo had asked her a series of inappropriate questions about her personal life, including age differences in romantic relationships, which she believed were sexual overtures. “I understood that the governor wanted to sleep with me, and felt horribly uncomfortable and scared,” Ms Bennett told the paper.

The news comes after New York City’s mayor and Mr Cuomo’s political rival, Bill de Blasio, on Thursday called for an independent investigation into allegations against Mr Cuomo made by another former aide, Lindsey Boylan. In an essay published on Medium, Ms Boylan described numerous incidents with Cuomo, including an unsolicited kiss in his Manhattan office.

In a statement in response to the latest accusations from Ms Bennett, Mr Cuomo said he had “never made advances toward Ms Bennett, nor did I ever intend to act in any way that was inappropriate”. He added that he had requested an independent review of her accusations and that Ms Bennett had “every right to speak out”.

“I believe the best way to get to the truth is through a full and thorough outside review,” Mr Cuomo said.

On Sunday, Mr Cuomo’s office backed down on its plan to appoint former federal judge Barbara Judge to lead the investigation. Instead it had asked the state’s attorney general and an appeals court judge to pick a lawyer to conduct an independent review.

Ms Bennett told the Times that she had informed Mr Cuomo’s chief of staff, Jill DesRosiers, about a particularly disturbing interaction with the governor less than a week after it occurred. She said she was transferred to another job on the opposite side of the Capitol. At the end of June she also gave a statement to a special counsel for Mr Cuomo.

The governor’s special counsel, Beth Garvey, acknowledged that the complaint had been made and that Ms Bennett had been transferred as a result to a position in which she had already been interested.

Ms Garvey said in a statement that Ms Bennett’s allegations “did not include a claim of physical contact or inappropriate sexual conduct” and Ms Bennett “was consulted regarding the resolution, and expressed satisfaction and appreciation for the way in which it was handled”.

“The determination reached based on the information Ms Bennett provided was that no further action was required which was consistent with Ms Bennett’s wishes,” Ms Garvey said.

Ms Bennett told the newspaper she decided not to push for any further action by the administration. She said she liked her new job and “wanted to move on”.

Ms Cuomo asked people to wait for the findings of the independent review “so that they know the facts before making any judgments”.

Some top New York Democrats had said any investigation should be placed out of the control of the governor’s office, including the selection of the investigator.

“The accused CANNOT appoint the investigator. PERIOD,” tweeted congresswoman Kathleen Rice, a Long Island Democrat. “The continued allegations are deeply disturbing and concerning. The behaviour described has no place in the workplace. A truly independent investigation must begin immediately.”

Mr Cuomo’s personal conduct is coming under a harsh spotlight at the same time as his once-vaunted record in battling Covid-19 in New York. Mr Cuomo is now facing an investigation by the FBI and federal prosecutors, and his own party wants to take away the emergency powers they granted him during the pandemic.

The attention springs from Mr Cuomo’s actions around the treatment of elderly people in care homes in New York. He created a new provision shielding hospital and nursing home executives from potential liability for decisions that might lead to people’s deaths from Covid, despite taking millions of dollars from the Greater New York Hospital Association and its associated executives and lobbying firms – the healthcare industry group that claims to have “drafted” the immunity clause.

Two days after creating the immunity provision, Mr Cuomo also directed nursing homes to accept patients back from hospital who were infected or might be infected with coronavirus – a move that has caused widespread controversy and allegations that it may have worsened the impact of the pandemic among elderly people. – Guardian/Reuters