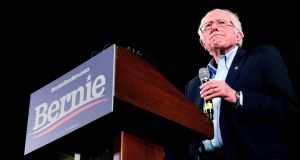 Presidential hopeful Bernie Sanders has suspended his campaign for the Democratic nomination paving the way for Joe Biden to become the party’s nominee.

“Today I am suspending my campaign. But while the campaign ends, the struggle for justice continues on,” the 78-year-old said.

While the Vermont senator established an early lead in the Democratic primary contest, winning victories in New Hampshire and Nevada in February and winning the popular vote in Iowa, his performance slipped in states like South Carolina, with a large African-American community.

Joe Biden, who failed to ignite popular support in the first ten months of his campaign, stormed to victory in the South Carolina primary on February 29th. Further victories followed on Super Tuesday, when he consolidated his lead, boosted my the endorsements from former rivals like Pete Buttigieg and Amy Klobuchar who dropped out of the race.

The former vice-president then established almost insurmountable lead over Mr Sanders, who failed to capitalise on his wins in the early voting states.

President Donald Trump tweeted: “Bernie Sanders is OUT! Thank you to Elizabeth Warren. If not for her, Bernie would have won almost every state on Super Tuesday! This ended just like the Democrats & the DNC wanted, same as the Crooked Hillary fiasco. The Bernie people should come to the Republican Party, TRADE!”

He was referring to Mr Sanders’ 2016 primary battle against Hillary Clinton which ended with Mrs Clinton’s nomination.

It is understood that conversations between the Biden and Sanders teams had been taking place in recent days. MrBiden is currently in his home in Delaware, with his campaign team running the presidential campaign remotely. Several states have suspended primary contests scheduled for this month.

The Democratic National Committee has postponed its convention, where the party nominee is selected, from July to August. Mr Biden spoke by phone to President Trump on Monday about the coronavirus pandemic, the president confirmed earlier this week. The US election will take place on November 3rd.

For weeks, Mr Sanders resisted calls to leave the race despite falling almost hopelessly behind his rival as the pandemic forced the candidates to retreat from the campaign trail and governors to delay several key primary elections. Against the worsening economic and public health crises, Mr Sanders found a new urgency for his progressive agenda, the centerpiece of which is a single-payer proposal that would guarantee health coverage for every American.

In the final weeks before his exit, Mr Sanders effectively turned his campaign into a coronavirus response effort, hosting virtual events on the virus and raising money for charities helping those affected by the outbreak.

He said the unprecedented public health crisis exposed the “cruelty and absurdity” of the American healthcare system, which he would like to see replaced by a Medicare for All program. But his efforts did not shift the political reality.

Though the early days of the primary were shaped by a robust contest of ideas, Democrats’ overriding priority was not ideology but electability. In March the race abruptly narrowed from a historically diverse field of candidates to two white men in their 70s. Suddenly fearful that a democratic socialist would jeopardize their chances against Mr Trump in November, Democrats in states from Florida to Washington, Michigan to Texas aligned behind Mr Biden, ultimately denying Mr Sanders a path forward.

As Mr Sanders fell further behind in the delegate count, he sent mixed signals about his intentions. In a series of public statements from his home town of Burlington, where he retreated amid the outbreak, Mr Sanders accepted that he was losing the battle over “electability” to his rival, but asserted that he was winning the “ideological” and “generational” debate.

Mr Sanders, ever strongest in the role of underdog, fought his way back into contention after suffering a heart attack in October and was all but written out of the race. As Elizabeth Warren, an ideological ally turned rival,fell behind, Sanders consolidated support on the left and, for a time, was the frontrunner for the Democratic nomination.

But he only found success when his opponents were divided. Mr Biden’s South Carolina win forced fellow centrists Amy Klobuchar and the former South Bend mayor Pete Buttigieg out of the race. Both threw their support behind Biden, who then swept 10 of the 14 Super Tuesday states, a hot streak that continued through March.

The billionaire Mike Bloomberg quickly dropped out after that and endorsed Biden. Warren bowed out the following day but declined to endorse either candidates in what was viewed as a loss for Sanders.

Perhaps no single candidate has done more to reshape the Democratic party in the past four years that Sanders.

Issues he popularised in 2016 - from Medicare for All to climate change - were the center of robust debates during the 2020 race. But his long-sought political revolution never quite arrived. Though Mr Sanders made gains with Latino voters, he struggled to expand his appeal to black voters and young voters did not turn out in the numbers he hoped.– Additional reporting Guardian News and Media