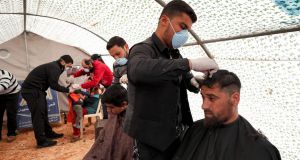 Volunteer barbers wear masks as they cut hair at a camp for displaced Syrians from Idlib and Aleppo provinces, near the town of Maaret Misrin in Syria’s northwestern Idlib province. Photograph: Omar Haj Kadour

Coronavirus has reinforced and prolonged the 32-day Russian-Turkish ceasefire imposed in Syria’s northwestern Idlib province since the World Health Organisation upgraded the outbreak to a pandemic.

Although it is frequently breached by clashes, the halt to hostilities provides much-needed respite for three million inhabitants of the province and serves the interests of the parties to the conflict.

Some 35,000 displaced civilians have resettled in their homes. While many returnees had fled with lorry loads of furnishings and possessions to foil looters, others did not and they are discovering what remains as they return to villages and towns.

The truce has enabled the Russian-backed government and the Turkish-supported al-Qaeda-affiliated opposition administration to focus on preventing mass infection. And, since Russia and Turkey have deployed ground troops to maintain and monitor the ceasefire, they seek to avoid contagion by ensuring the truce is observed.

Having boosted to 56 the number of its military outposts in Idlib, Turkey has ordered soldiers based there to curtail movement, thereby allowing some shelling and sniping between Syrian army troops and jihadis. Russian military aircraft and drones constantly patrol the skies to monitor the ceasefire.

Both the government and opposition have received test kits from the WHO. Given access by Turkey, the organisation plans to dispatch health workers, masks and respirators to Idlib city and camps housing 900,000 displaced near the Turkish border.

The situation in Idlib will be affected by the scale of the virus’s spread in Turkey, which could cause it to sweep across the border with troops and aid workers.

While no cases have so far been found in Idlib, the government reports 19 in the 70 per cent of Syria under its control. Britain-based Syrian Observatory for Human Rights puts the figure for civilian cases at 30 with 202 in quarantine, and says 53 cases have been confirmed among Iranians and Iraqis.

Emergency teams and test kits were on Monday dispatched by Damascus to the Kurdish-held city of Qamishli in northeastern Hasakeh province. Hasakeh has one functioning hospital and a number of underequipped clinics.

The WHO and other UN aid agencies cannot reach this region through Turkey. It regards Syrian Kurdish forces as an enemy offshoot of Turkish Kurdish insurgents who have fought Ankara for three decades.

The Iraqi border crossing closed early this year under pressure from the government and Russia, forcing the UN and humanitarian agencies to rely on the government for access.

The virus has not halted Turkish intervention in the northeast or harassment of Kurdish forces east of Idlib. After an eight-day disruption, Turkey has restarted a pumping station providing water to 400,000 residents of Hasakeh city. Turkish forces or surrogates regularly shell Kurdish positions near the border.

The US, the Kurds’ primary external sponsor, has allocated $1.2 million to maintain these facilities and has paid $14.6 million for Syrian aid into the WHO’s $274.1 million fund to benefit countries impacted by coronavirus.