Coronavirus: WHO on defensive after outcry over Taiwan snub

A video of an interview with a WHO adviser went viral over the weekend in which the senior official appeared to hang up on a journalist who asked about Taiwan’s membership status in light of the coronavirus outbreak. Video: RTHK 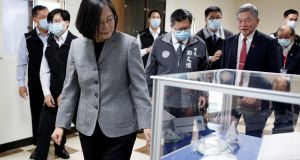 The World Health Organisation went into damage control on Monday amid growing criticism of its isolation of Taiwan since the coronavirus outbreak, and accusations it ignored an early warning from Taipei about the possibility of human-to-human transmissions.

The WHO was forced to respond after a video of an interview went viral over the weekend in which a senior official appeared to hang up on a journalist who asked about Taiwan’s membership status in light of the coronavirus outbreak.

In the interview, WHO adviser Bruce Aylward said he couldn’t hear properly when the Radio Television Hong Kong reporter brought up the sensitive topic of Taiwan’s membership of the organisation. He asked the journalist to skip to the next question, and then the line disconnected after she continued with the Taiwan issue.

When the call was reconnected, Mr Aylward refused to discuss Taiwan’s handling of the outbreak, only saying “all areas of China have done well”, before hurriedly ending the interview.

China considers the self-governed, democratic Taiwan to be its province and is forcefully pushing for formal reunification. As part of its efforts to isolate and delegitimise the government in Taipei, Beijing blocks Taiwan’s participation in international bodies such as the WHO.

Taiwan accuses Beijing of playing politics with the lives of its 23 million citizens by keeping it out of the WHO and denying it access to first-hand medical information. China and the WHO reject those allegations and say they provide the island with the information it needs.

In response to the outcry following the viral video, the WHO released a statement saying the question of Taiwanese membership was up to the member states, not the organisation’s staff.

“However, WHO is working closely with all health authorities who are facing the current coronavirus pandemic, including Taiwanese health experts.”

Taiwan has said its doctors had been in communication with mainland colleagues in December and had learned then that medical workers treating patients with a novel respiratory illness in Hubei were falling sick, a likely indicator of human-to-human transmission.

They wrote to the WHO on December 31st raising concern about human-to-human transmissions, and while they got a note to confirm their letter had been received they did not receive a response.

Taiwanese officials said they later sent a reminder, and submitted early research findings on an ongoing basis, but their concerns and research were not shared with other countries on WHO platforms as it is not a member.

The delay was critical in the spread of the infection, as Wuhan’s mayor later said that in the two weeks preceding the health ministry’s confirmation more than five million people had left the city on domestic and international travels ahead of the Lunar New Year.

Taiwan began screening passengers flying in from Wuhan in late December and had activated its emergency operations centre by January 2nd – an early initiative that experts say played a significant role in stemming the spread of the virus on the island. It has reported 298 coronavirus cases and three fatalities to date.

WHO director general Tedros Adhanom Ghebreysus has repeatedly praised China’s response, even as it has faced criticism over its initial mishandling of the outbreak, and for silencing whistleblowers and resisting early offers of international co-operation.