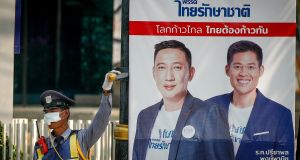 A security guard stands next to an electoral poster with a portrait of Thai Raksa Chart party leader Preechapol Pongpanich (right) and a constituency candidate, in Bangkok on Wednesday. Photograph: Diego Azubel/EPA

Thailand’s elections watchdog has asked for the party behind last week’s abortive bid to field the king’s sister as its candidate for prime minister to be dissolved on grounds it violated the constitution, ratcheting up tensions ahead of a closely watched upcoming national vote.

The kingdom’s electoral commission on Wednesday submitted a petition to Thailand’s constitutional court asking for the Thai Raksa Chart (“Thai Save the Nation”) party, affiliated with exiled, former prime minister Thaksin Shinawatra, to be wound up on grounds that it was “hostile to the constitutional monarchy”.

Dissolving Thai Raksa Chart could have big implications for the party, which denies wrongdoing and argued its case in court on Wednesday. “We have presented our case to the constitutional court and we really do hope that they will take every aspect into consideration before deciding,” said Umesh Pandey, an MP candidate for the party.

However, analysts said that the election committee’s move to ban the party, one of four affiliated with the Thaksin camp, could take months, and might backfire. “This tactic would not actually remove the Shinawatras from politics,” said Titipol Phakdeewanich, dean of the faculty of political science at Ubon Ratchathani University. “It would help them gain more support from their power base, because they would get more sympathy as victims of the system.”

The move to dissolve the party comes amid continuing fallout from last week’s bombshell announcement by the party to nominate Ubolratana Rajakanya, the older sister of King Maha Vajiralongkorn, as its prime ministerial candidate, in an incident that startled Thais and upended the kingdom’s political scene.

The Thai king effectively vetoed the notion hours after her name was floated, calling it “inappropriate” and unconstitutional. Days later, the incident is still resonating ahead of an election in which battle lines have been drawn between pro-Thaksin parties and politicians loyal to the ruling military junta.

Late on Tuesday Ms Ubolratana apologised for the episode for the first time on her Instagram account.

“I’m sorry that my sincere intention to work to help the country and our Thai people has caused such problems that had seemed unlikely to occur in this day and age,” Ubolratana Rajakanya said late on Tuesday. She added the English hashtag #howcomeitsthewayitis.

Ms Ubolratana’s apology came a day after the electoral commission omitted her from its list of candidates running in the March 24th election, quashing her shortlived run, which broke protocols and violated taboos in the arch-conservative, hierarchical kingdom where royals are meant to be above politics.

Thailand’s election will be the first since the 2014 military coup. The kingdom’s ability to conduct the vote fairly and avoid descending into the street violence that marred recent political cycles is being watched closely by investors, human rights groups, and political analysts.

The “redshirt” pro-Thaksin camp have won every Thai election since 2001, and the notion of a royal family member joining one of their parties would have likely further bolstered a group who have been accused in the past of being insufficiently loyal to the monarchy. Thailand’s two most recent military coups, in 2006 and 2014, came after electoral victories by Mr Thaksin and Yingluck Shinawatra, respectively.

Separately this week, Thailand’s media commission suspended the operating licence of Vice TV, a station linked to Mr Thaksin, after accusing it of causing “public confusion”. Human Rights Watch, the campaign group, on Wednesday called on the body to reverse its decision, saying the move would “raise doubts about the fairness of the media environment” ahead of the election. – Copyright The Financial Times Limited 2019