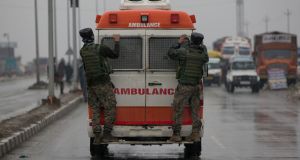 Indian paramilitary soldiers hang on to an ambulance near the explosion site in Pampore, Kashmir. Photograph: AP Photo/Dar Yasin

At least 40 Indian paramilitary personnel were killed after a suicide bomber rammed his explosive-laden vehicle into their convoy on Thursday in the disputed Kashmir State in the deadliest attack of its kind in two decades.

Officials said some 13 Central Reserve Police Force personnel were severely injured in the strike at Awantipora on the outskirts of the war-torn state’s summer capital Srinagar. They said the death toll could rise as many of the security personnel had suffered grievous shrapnel injuries.

Pakistan-based Islamist group Jaish-e-Mohammad (JeM or Army of Mohammad) has claimed responsibility for the bombing in a statement to local media in Srinagar.

The JeM has been active in Kashmir since in 2000, and India holds it responsible for attacking its parliament building in New Delhi in 2001 in an assault that brought the nuclear-armed neighbours to the brink of war.

India also blames JeM for striking an army camp in Kashmir in September 2016 in an attack which killed 17 soldiers.

Security officials said JeM had been distributing footage of a recent car bombing in Afghanistan on social media in Kashmir earlier this week, and had warned locals that they would replicate the attack in the state.

Federal home ministry sources said that the bomber attacked the 78-vehicle convoy carrying more than 2,500 paramilitary personnel from the state’s winter capital Jammu to Srinagar along a heavily guarded highway.

Police said the convoy was unusually large because many paramilitary personnel had been stranded in Jammu due to inclement weather over the past few days and needed to get to Srinagar.

They said the bomber ambushed one of the convoy vehicles in an SUV packed with more than 350kg of explosives long after parties of soldiers and sniffer dogs had cleared the highway, in procedure which has been routine in Kashmir for more than 30 years.

Television news channels flashed pictures of the charred remains of the bombed bus that were littered across the highway.

A similar attack occurred in Srinagar in October 2001 after three terrorists rammed their explosive-filled vehicle into the gate of the state assembly complex, killing 38 people.

“We will respond with firmness,” Kashmir’s governor Satya Pal Malik told the NDTV news channel after the attack. He said officials would review the security situation and blamed Pakistan for the bombing.

India claims that Pakistan – which seized a third of Kashmir after independence in 1947 and lays claim to the rest – supports a Muslim insurgency active in the province. More than 70,000 people have died in the dispute over the past 30 years.

The two neighbours have fought two of their three wars since independence over Kashmir.

And in 1999, soon after both states reached nuclear capability, their armies clashed in Kashmir’s Himalayan Kargil region for 11 weeks, resulting in the death of 1,200 soldiers between both sides.